For a few months now, I’ve mentioned various projects I’ve been working on but haven’t explained here exactly what they all are. As the time has been right for each one, I’ve shared them. This particular one that I’m about to share is probably the biggest one I’ve been working on, but have been the quietest about in this space.

END_OF_DOCUMENT_TOKEN_TO_BE_REPLACED

We’re on day 5 of no kid here and I’ve gotten lots of questions about what we’re up to while our gal is gone.  Here’s my week in review.

END_OF_DOCUMENT_TOKEN_TO_BE_REPLACED

A few weeks ago, my friend Susan called and asked if I would help her put together an evening for her culture club.  She explained that the culture club sprung out of her book club – at some point, they realized that they really weren’t reading or discussing the books, but they still enjoyed getting together and doing things.  And thus, their culture club began.

END_OF_DOCUMENT_TOKEN_TO_BE_REPLACED

Last fall, my friend Guinevere gave me some encouraging words about organizing Cville Swaps, about how it would someday take on a life of its own. 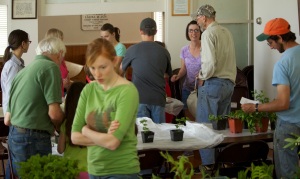 END_OF_DOCUMENT_TOKEN_TO_BE_REPLACED

March madness has morphed into Assiduous April.  I knew at the onset of March it was going to be busy.  And then things happened…..all good things, but it seemed like all I was doing some days was adding to my to-do list instead of actually tackling any items on the list.  I also found myself writing things down – I pride myself on not having to write things down.  When I write things down, that means I’m overwhelmed, I have too many things going on and I need to slow down.  I kept telling myself if I could just get through the month of March, I could get caught up.  All of it.  The house, other projects that got shoved to the back burners, time with friends, my garden…. END_OF_DOCUMENT_TOKEN_TO_BE_REPLACED

The problem with people knowing I occasionally write about food and wine is that they think I know quite a bit on the subject.  To be honest, I really only know about the food and wine I either like or have worked with.  Which up until now, has not been French wine. If I’m going to be fully honest here,  I am slightly intimidated by French wines – the appellations (a defined regional area), the Crus (still trying to grasp that one) the pronunciations (I butcher anything longer than a 2 cent word in my native tongue, my pronunciation of French is abysmal despite 3 years of French), the fact that French wines are among some of the most respected and most expensive wines in the world – I have at best, a rudimentary knowledge of French wines.  I know just a little bit about  Bourdeaux and Burgundies, that only French winemakers in a particular region produce true Champagne and that Cotes-du-Rhone and Chateneauf-du-Pape are regions for wine in France, but beyond that, I don’t know much about French wines. END_OF_DOCUMENT_TOKEN_TO_BE_REPLACED