April 11, 2012March 15, 2013
People say I’m crafty and creative, but the true creative soul in our house is the wee one. Ever since that spring break where I let her have a little too much unsupervised TV time and she watched Martha Stewart decorate Easter Eggs, she hasn’t been content to just ‘color’ eggs.  Oh no.  There was the year she made the drying rack, just like Martha’s of course, out of foamcore and straight pins.  She made it entirely herself, all I had to do was contribute the materials. 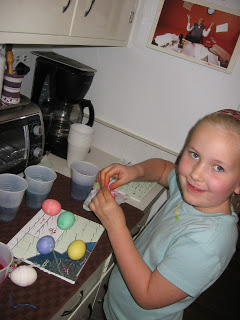 Every year, she starts collecting ideas for how she’s going to decorate eggs this go round.  This year she broke out the box of crayons and got festive with it.  Among the highlights: 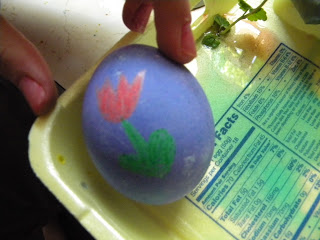 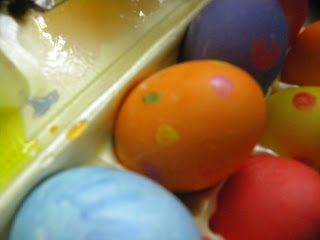 This crazy cool graphic doodle one. 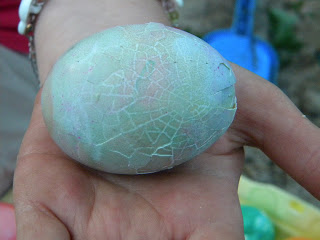 I don’t know how she got this one to have the spider web look (before the shell cracked), but this one was wicked cool.

As you can see, the fancy drying rack did not get broken out this year. I may have disassembled it in order to get my straight pins back to sew something and never did put it back together. Thankfully, she was able to make due.

I’m pretty sure this is the last year she will believe in the Easter Bunny.  Frankly, outlasting her at bedtime so that we can get all the treats put out is hard as all get out, so I think I’m ready for this, sad as it may be.  The nun I had in fourth grade was the one that spilled the beans for me on Santa, the Easter Bunny and the Tooth Fairy, so I’m curious as to how she’s going to give up this belief of hers.  A few weeks ago she asked if I believed in Santa and while I answered affirmatively, I wonder what’s going on in her mind on that topic. I’m afraid if I dig too much, she might lose that faith and I don’t want to be the one responsible for it.  The memory of that nun telling us that only spoiled rotten brats believed in those silly fairy tale things like Santa Claus haunts me to this day.  From a parent’s point of view these days, I see her as an even more bitter person than I did in the fourth grade, because frankly, the longer my child believes and stays just a wee bit young is a wonderful thing in today’s day and age.
Edie has a number of big changes coming up on the horizon – not only does she move from her sweet little elementary school to the bigger upper elementary school up the street (along with every other current 4th grader in the city), her bf who lives just down the street is moving to another country.  She’s frequently out of sorts about all this, as you can imagine.  Sometimes she just wants these changes over and done with, so she can stop waiting for them.  Sometimes she just wants to stop time and always live in this exact moment and I can’t say I blame her for that either.  Her planned sleepover with her friend the beginning of spring break fell through and she cried herself to sleep the first few nights of spring break because of it.  I think I’m getting used to her little outbursts about all this and thankfully, she’s getting better about being able to notice it’s anxiety about all the big changes coming up that cause these outbursts. Throw in the fact that she’s a 10 year old girl and all over the place and well, we have our hands full with her right now.   One minute she wants to dye her Easter Eggs all by herself and the next, she wants me there to watch her do it.  Like her belief in the Bunny and Mr. Claus, I’m embracing it for all it’s worth, because I know, this moment is fleeting.

3 thoughts on “My Sweet Easter Gal.”