I co-hosted a bridal shower for my cousin Molly over the holiday weekend.  When Aunt Jenny proposed the idea, she suggested a brunch, then after I agreed, followed up by asking for a proposed menu. It wasn’t until she asked for a shopping list that it sort of dawned on me that by co-hosting, I would be catering the whole she-bang.  Why yes, I’m fully capable and yes, I do happen to actually do that particular activity from time to time for people I’m not related to, but always in the role of the very capable assistant, never do I actually assemble the menu and recipes and shopping list myself.  I’ll admit, I had a moment where I wondered WTF I was doing, with a  wavering in confidence before I got over myself and just went with it. 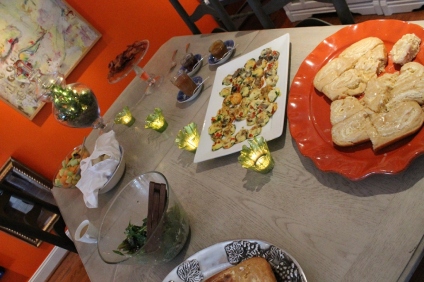 I went with things I know I do well – lemon cheesecake morning buns, biscuits and mini quiches with bacon and some preserves from the pantry.  Aunt Jenny made a salad and there was a fruit salad as well.  I made the buns ahead of time and froze them, pulling them out to thaw the night before.  They may have actually sat out a little too long (it was rather warm last weekend) and so the end result was an extremely light and airy bun that I was a little impressed with (nothing like a little self pat on the back).  The biscuits were absolutely spot on while the mini quiches had a few technical difficulties – they were not the prettiest, but they tasted okay, so that’s what counts.

Edie girl made a garland of the ‘save the dates’ to hang on the banister at the doorway and decorated the shower favors of bottles of sparkling wine with bows and bells.  The wedding dresses of the mothers of the bride and groom hung over the top of the entertainment center (I kept expecting Winona Ryder to suddenly rise up and  fill them out à la Beetlejuice to tell the truth). 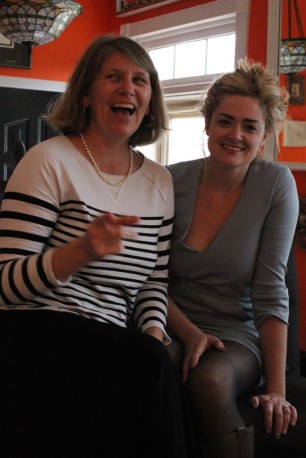 The affair itself was a lovely one, with pink champagne, kir royales and some of Molly’s favorite people in attendance.  It was certainly a good warm up for the fast approaching wedding, to be held in just a few weeks. I just love a good wedding, don’t you?

6 thoughts on “A bridal shower.”