It almost escaped my attention that Sandor Katz was speaking at the Heritage Harvest Festival up at Monticello this past weekend.  Upon discovering this news, I immediately booked myself a spot in his morning workshop that was billed as a ‘premium workshop‘, meaning in addition to forking out money for a festival ticket, I shelled out money for the workshop as well.  I mention this because I pretty sure I haven’t paid to attend any sort of food or wine related event in a solid 15 years or so, with the last one I paid for also held up at Monticello – a canning and food preservation class (which yes, was THE class that began my canning odyssey), managing to get into all the events I’ve attended over the years for free. I found out later I probably could have finagled a free entry for this, but in the interest of karma, I figured it doesn’t hurt to actually pay for something once in a while.

For those who don’t know who Sandor Katz is, he’s THE rock star of the fermenting world.  He’s written what is pretty much considered the bible of fermentation – “The Art of Fermentation“.  The idea of learning about the process from the master was pretty darn tooting exciting for me, even though  I really only dabble in fermentation and freely admit, that even after making my own sauerkraut, I really just don’t care for it very much.

It was everything I had been looking forward to and more.  Katz is a fantastic speaker – personable, funny, engaging and incredibly knowledgeable.  He went deep into the how of why fermenting is good for our bodies as well as delving into the various ways one can ferment, while demonstrating making a batch of kraut.  I learned so much and not just about fermentation, but  food (and more!) in general.  It was interesting and enlightening and immediately after his talk, I walked upstairs to the book store and bought myself all his books that were on offer in the Monticello gift shop that I didn’t already own and got them signed in addition to his books I did already own. (It was very much a ‘treat yo self‘ day.) 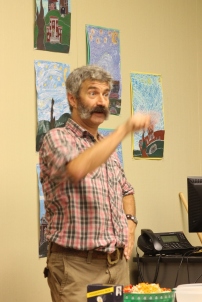 Among the things I brought out of that class (I took 10 pages of notes – I’m telling you, it was a fantastic talk) was how to fix a ferment that I make too salty or too watery.  I learned how to maintain a ferment when I notice white scum growing (like I had just noticed on my hot sauce ferment which I fixed upon returning home).  Even Sandor Katz thinks sour cucumber pickles are the hardest to pull off, although he gave some excellent tips on how to keep them from getting too mushy – I knew about using leaves with tannins, like grape, oak or cherry leaves in a ferment, but I learned you can also use tea bags or horseradish leaves. I also realized last time I disastrously tried fermenting cucumbers, I let them sit  far too long!  I just so happen to have some cucumbers on hand, so I’m going to try my hand at them again.  Perhaps most enlightening was Katz stating that there is ‘no virtue in waiting two months if you like it better after four days’ in speaking to how to know when a ferment – particularly kraut, is ready.  It’s all subjective, so by all means, only let something actively ferment until you like it.  This concept has me thinking I’ll try my hand again at kraut, but in a small batch which is how Katz says to experiment with fermenting.  But of course!  Small batch is the way to go on everything experimental.  I know this already, but it’s always good to be reminded and prodded to apply this to everything, not just canning.

In the Monticello kitchen

After his talk, which was held in the morning down at the visitor’s center, I took the shuttle up the hill to the main grounds, where the rest of the festival was taking place.  There were all sorts of talks and demos taking place, including my friend Mark leading a talk in the kitchen.  Vendors were set up all around the grounds, with loads of cool things to check out and taste and learn.  Among the friends and neighbors I ran into were Taylor, Coro and Everly. I realized when I got home, most of the photos I took that day were of Everly running around the petting zoo. 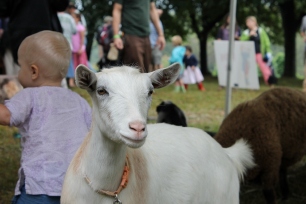 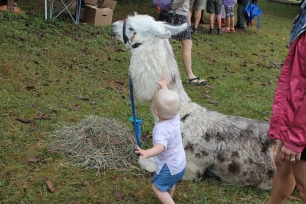 In addition to my new books (“The Art of Fermentation” and “The Revolution Will Not Be Microwaved: Inside America’s Underground Food Movements”), I brought home some of my friend Will‘s new Back Pocket Provisions Bloody Mary mix, which he insisted I taste and I will admit, is quite good.  I was willing to buy it completely untasted for Pat because I just don’t care for Bloodies and knowing Will (and his involvement with The Rock Barn), I had no doubt it would be top notch and of course it is.  I will admit though, I would have never have thought to get the Bloody Bangkok had I not tasted it, so thanks for making me taste it Will. It was not at all what I expected and was quite possibly my favorite!  (Still not drinking a bloody mary though. They are just not not my thing.) 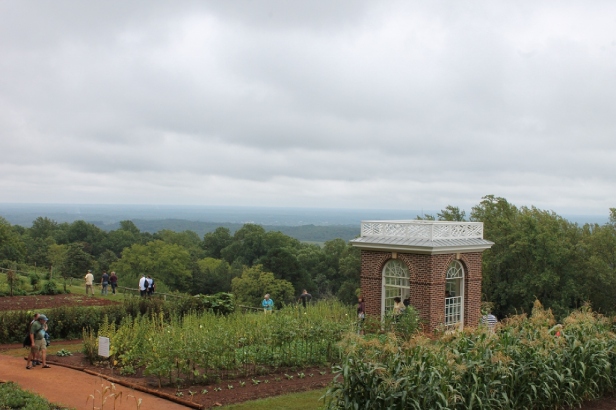 Despite the grey weather, it was a fantastic day – even in the clouds Monticello has some amazing views! I had some great conversations with various vendors and fellow attendees and learned about much more than just fermenting, but fermenting with Sandor Katz was absolutely the the highlight. There was so much more I wish I could have taken in – Andrea Chesman was speaking (and talking pickling! Her green bean pickle recipe is the recipe that first introduced me to pickling, a recipe I picked up at that canning class so long ago….), but I sort was wiped out by about mid-afternoon, so I headed home and spent the rest of the day watching some nailbiting (Auburn, Virginia) football games while babbling to my people about fermenting.  Thankfully, they are completely on board with trying whatever I experiment with.  As if they had a choice.

5 thoughts on “A workshop with the master. And a festival!”