This week’s adventures involved no water fun – instead I opted to stay home and clean, which I know is sort of a head scratcher, but sometimes those time outs are necessary.  Not that having a clean house has ever been a priority for me, but since taking on a M-F part time office job in addition to everything else we always seem to have going on, I find the house has moved even farther down the priority list.  I despair of ever having a spotlessly clean house, but I did manage to get rid of piles and some mystery odors, so I felt rather productive and virtuous and for the first time in a good month, the den is hospitable again. 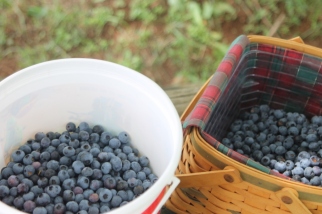 I also found some time to go blueberry picking with Edie girl.  While we have managed to have a steady supply of local blueberries to eat for a few months now, beginning with our own bushes and continuing past that with a berry picking excursion to The Berry Patch with my friend Jenny, I’ve yet to put up any blueberries this season (Blueberries, that’s what been for breakfast every day for over a month!).  Sunday morning, we set out to this patch I discovered last year, thanks to a friend (I think it was Cinda, but I’m not sure).  It’s the sort of patch one aspires to find, marked by a handwritten “Blueberries” sign a few feet down the road from the driveway in which to turn.  From there, there’s a sign telling one where to park, and after crossing a creek on a little footbridge, you find the pay station, which consists of a picnic table under a tree containing the cash box and all the information one would need -including the affirmation that nothing is sprayed on these berries, as well as a note about the dog – handwritten on index cards, placed in plastic bags and thumb-tacked to the table, just downhill from the patch itself.

We picked just shy of 8 pounds of blueberries – my bucket contained about 5 1/2 pounds and a good half of that came off of just one bush.  We brought the berries home, where more than half ended up in the freezer, a blueberry peach cobbler was made for dinner last night and the last 3 pounds were made into blueberry syrup, currently cooling on the dining room table.

Blueberries are hands down, my absolute favorite produce to put up.  They don’t need to be chopped or de-seeded, just wash them and head straight into whatever it is you’re going to do with them.  If you are freezing them whole, you don’t even need to wash them – just spread them out on a cookie sheet lined with wax paper and stick right in your freezer.  Let them sit overnight and then put them in a plastic bag and when you pull the berries out to use them, rinse them then. If only all produce was as easy to put up as blueberries….

9 thoughts on “A most glorious blueberry patch.”