I first discovered Suzicate’s blog, The Water Witch’s Daughter, while in the midst of getting sucked down one of those rabbit holes the interwebs are famous for.  Her writing struck a chord with me as her Virginia is for Lovers page gave away she was from the same state. I discovered she lived in Virginia Beach on the coast, but was from Nelson County, just south of here.  The more I got to know her, I realized we were creative kindred spirits and then some.  We picked at the same orchards. I was pretty sure we knew some of the same people and that our husbands would hit it off.

Tuesday night, we met up down at Thai Siam – somewhere I’ve been dying to try since first driving past it on my way to pick strawberries at Seaman’s.  There is something about a Thai restaurant on a back road in the middle of nowhere that just tells you it’s pretty mac daddy.  It did not disappoint.  If I were a better food blogger, I’d have taken better pictures and would be writing a lovely review.  Instead, I will tell you the green curry was phenomenal, I definitely picked up a few tricks for the next time I make it and we will be using the take out menu we grabbed next time Pat’s driving home from Lynchburg.

We took our Thai take out and headed down to the Blue Mountain Barrel House to enjoy their Tuesday $2 pint special and watch the sunset.  My suspicions of us knowing at least a few of the same folks became apparent while we sat there over beers.

As a couple walked out of the tasting room, Suzicate recognized her fourth grade teacher, whom Pat recognized as a teacher he had taken out on regular field trips during his close to 15 years with the Chesapeake Bay Foundation. Small world indeed.

Dirtman, Suzicate’s shutterbug better half, had taken his camera out of his truck the night before, which meant he didn’t have his on hand.  I very willingly handed mine over (Pat suggested perhaps I could learn a thing or two from him about using it) for him to capture not just the moments, but the sunset. 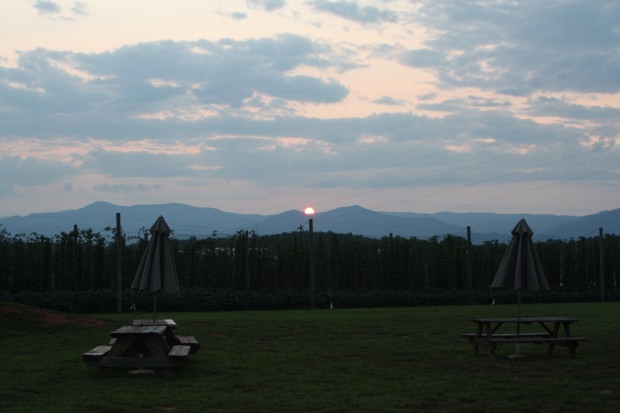 Dirtman knew the names of all the peaks on the horizon as we watched the sun set. Those were the hills he grew up climbing.

We lingered long past last call, closing and dark.  The evening was gorgeous, wonderfully chilly for late July and the company was top notch.

It’s a curious thing, this blogging and making friends online.  Technology can be both a blessing and a curse – we collectively spend too much ‘plugged in’ with at least some of the results to be seen in the media that must be fed every minute of every day – but it also makes this world a smaller place in good ways.  Jetsons‘ style technology of FaceTime allows Edie to keep up with her bff half a world away, while this space has helped me make the acquaintance of quite a few of you I probably would not have otherwise. We may have crossed paths with Suzicate and Dirtman, but would we have known straight off the bat how much we had in common with them?  Probably not.  And that my friends, is one of the beauties of this interconnectedness – yet another place to find unexpected friendships.