The students that took my inaugural pie class at Betty’s building last week got a treat in the shape of a guest instructor.

It seems that Edie, who had offered to come be my assistant that evening, was completely bothered that I was showing the ‘easy’ way of rolling out a pie crust.  I have long admitted she is far better at rolling out a crust than I am – she’s been rolling my crusts out for me since she was a toddler.  She has little patience with the fact that I struggle with making things like pie crusts look ‘perfect’ – I go with a more rustic look because hey, that’s what I get to work for me.

So as I started showing my students the ‘pie crust for dummies’ technique I’ve developed after careful trial & error testing, she jumped up and took over, borrowing an apron from one of our students. 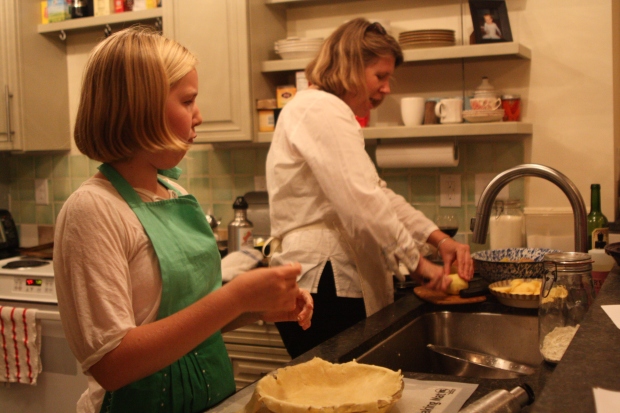 While that was happening, one of the said students (who also happens to have the pleasure of being Edie’s teacher of several years) grabbed my camera to capture the moments.

It was not all eye rolls and ‘what are you doing mother’, as you can see.  I love that my girl feels confident enough to jump in and show off her skills.   Pie is one of those things you can learn, but some people are born with the skills – my mother is a pie champ and clearly, Edie inherited that.  Pie skills skip a generation, that’s for sure.

I like to sandwich my crust between two layers of plastic wrap when rolling it out.  I find it makes it easier to transfer to the pan.  Edie girl however, merely sprinkles some flour on top and has at it.  It has never failed that when I go her route, I end up peeling bits of crust off the counter and piecing it together in the pan.  Not my girl. She’s got pie skills. I tried explaining to her that I was attempting to show students easy ways of approaching it so that they wouldn’t get overwhelmed with crust fail, as I had.  Of course she had no patience for that – which may actually be something she inherited from me. 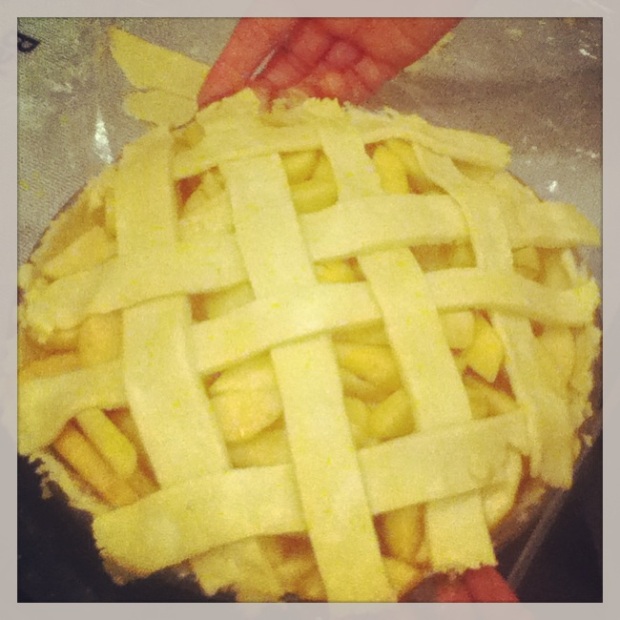 Fantabulous assistant that she is, she even managed to instagram the pie just as I was putting it into the oven. (If you happen to follow me on there and saw that post, that was all her.  She often posts on there as me and damn if she’s not good at it.)

It was a fun class, a good start to finally put into action some of what Betty & I have been plotting for the last several years.  There was interest expressed in another pie class as well as other topics.  I’m going to ponder them and will hopefully announce some other holiday-themed classes next week.   If there’s anything you’d like to see, let me know.  Betty and I are hoping to do a number of low-key, cozy little events there, including maybe even a few talks on wine.  We definitely plan on something for everyone.

With or without my mini-me taking charge.

12 thoughts on “The best assistant.”