Our neighbor Brian was out of town last week, during which the majority of figs on the tree in his front yard ripened.  Not wanting to leave such goodness for those no-good squirrels, I helped myself.  Then Brian came back earlier than expected and I felt bad I’d helped myself to his figs.  To compensate, I thought I’d make him something with the figs.  Because there is nothing more thoughtful than preparing baked treats for your neighbors with figs they grew and you helped yourself to.

I had a hankering for fig newtons.  I googled homemade fig newtons, found a way to use fresh figs in them (although apparently dried are preferred) and went at it.

The recipe said to beware using too much flour in rolling out the dough.  I used spelt flour in making these and generally, whole grain flours need a little extra moisture, which I did not add and indeed, it was not needed.  In trying to avoid using flour to roll the dough out, I rolled the dough out like I do pie crust, between layers of wax paper.  It was absolutely unworkable – sticky and well, you can see the resulting attempt at a cookie.  And that was after I went back and added flour to the process.  Total dough fail. 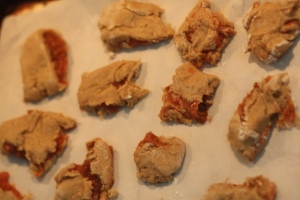 Which lead to some really ugly cookies.  However, thanks to my new camera (that I am still learning how to use and probably will be for some time to come), you have some very pretty pictures of some very ugly cookies with an overly sweet dough that was impossible to work.

Thankfully, everyone is still willing to eat them and Brian was touched I made him cookies.  With his figs.  Because I’m thoughtful like that.