I totally meant to write this post earlier in the week,  but one thing after another popped up and next thing you know, it’s a week later and one realizes oh, that never happened.  And then, because I’m one of those people who believes that if you do something and you’re going to blog about it, you should do it in a timely manner, ie, just after it happens, I started debating whether to do it at all.  Sitting here on a Sunday morning where the sun can’t quite decide if it’s coming out or not, realizing that until this stinking dining room gets done, getting this house clean and decluttered is just not an option and I really should get myself geared up just a little bit more before jumping back into that dining room project, it seemed like I should write about it.

It being the salad dressing demonstration I did down at the City Market last weekend.   I recently joined the board of Market Central, the non-profit that works to support the market.  I am on the education committee, so I am working to help line up classes this season.   We are expanding classes this season from just food preservation classes such as canning and the like to include some basic cooking classes.   We also wanted to add more demonstrations, which have been well received in the past.   My friend Chef Mark Gresge of l’etoile is frequently down there, schedule permitting, doing this, helping to promote new ways of cooking what’s in season that day.  The idea was that we’d build on what he does so well.   I casually mentioned that I’d be willing to do something down there, that I had just done a salad dressing demonstration for a group and next thing I knew, our kick-ass administrator Matt had me scheduled to come down there and do a salad dressing demonstration at market one Saturday. 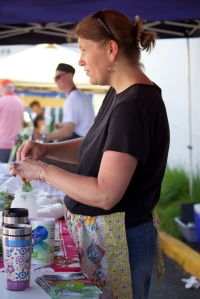 It just so happened Mark was down there that day too, so I joked we were going ‘head to head’.  I whipped up an olive oil-red wine vinaigrette and a buttermilk ranch dressing, and served it on top of greens donated by some of our vendors:  Lettuce Grow Farm, Radical Roots and Liberty Farm.  Brightwood Farm donated the herbs I used in my buttermilk ranch dressing. 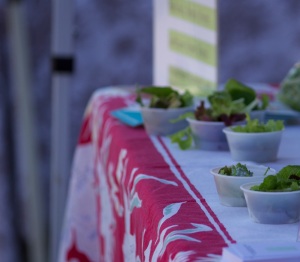 I then proceeded to spend the morning handing out mini salad samples & chatting people up.  My friend & fellow board member Kathy was there with her camera and was kind enough to share these  photos with me.

Matt whipped up a fabulous recipe card to go along with the samples, and Kyle & Cile (our Financial Coordinator and Chairwoman, respectively) helped man the table when I took little breaks, like running down to grab a jar of jam from Daniel, asparagus from Farmer Brown or some beets from Whisper Hill Farm. (Yes, we are still trying to like beets.  And the most edible ones to date have been from Whisper Hill, so I’m sticking with them!). 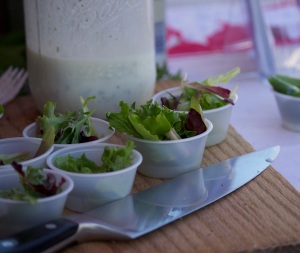 It was fun manning my own little table after spending so many mornings over the last few years hanging out with Mark at his table.   There’s enough time left in the market season, I just might do it again before it’s all over.

But first, I really have to get this dining room done.

5 thoughts on “Down at Market.”