July 17, 2012March 15, 2013
The whole block, at least our side of the street, is under seige.
I went down to Betty’s yesterday and she told me the tale of how she was standing in her kitchen when she heard a noise.  She looked up and saw a squirrel trapped between her kitchen window and the screen in front of it.  When she opened the window, the squirrel fell through the screen and landed on her kitchen counter.

You can see the outline of the squirrel in the hole. 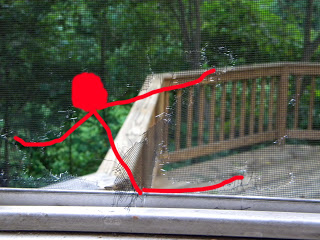 Since this is the internet and I can’t pose for you in person the way the squirrels position themselves when chewing through the screens, I got fancy with technology and drew you a stick squirrel.  It’s other foot was below the window line.

Perhaps this one gives you a better idea. The red blob at the bottom is it’s tail.
See it now?

It did some damage to her kitchen window too, trying to chew it’s way through the wood.
Seriously, we are under siege.  We have set the hav-a-heart trap and have gotten the main offender, the one we call Fatty, which was the biggest of all the squirrels, the one that sitting on our porch earlier this year, Pat thought was a small groundhog that had gotten really brave.  No, it was that big of a squirrel.  A few smaller ones have been caught and taken care of as well.  Are we going to have to trap every last squirrel in the neighborhood?  We have dozens of them, it could be never ending!
I’ve even broken down and suggested we get a dog.  Yes, we need a fence, but we have everything we need to build one – you see, we were going to get a dog many moons ago and got everything we needed to build a fence, but then realized that it was going to be a lot of work to build said fence and a baby wasn’t as much work at the outset, so we had a baby instead of getting a dog. I later realized that we could have left the dog home alone much sooner than we could the kiddo. Also, I’m not a dog person.  I’m a cat person.  Who is married to someone who is highly allergic to cats.  And before anyone says, oh, he can take allergy medicine for that, let me tell you, he can and does but he still has pretty horrific allergy attacks around cats that aren’t pretty.  So, we don’t have cats.   And because I have long suspected I would be the one to take care of the dog the most (confirmed when we borrow friend’s dogs just to see how it would go), I have not been quick to get a dog.  But clearly, this squirrel problem is going to take a bigger solution than what we are currently doing.  I may just have to get a dog.  Damn those squirrels.

There’s a new post up over at Cville Swaps, plus the announcement of our latest swap date.  Go see what I’ve been up to when I haven’t been battling psycho squirrels.