June 3, 2011March 15, 2013
Edie requested I make her a skirt, one of my whimsical tiered skirts.  Of course missthing insisted on approving the design, ie, fabric selection.  I laid one out and had it approved, only to discover I didn’t have enough fabric to make it as promised.  Which led us back to the drawing board.  After going through a few versions that were deemed “Not ‘Alive’ Enough.”, we reached a compromise that would use all the fabrics in the approved ‘ALIVE’ design, but in accordance to the amount of fabric I had on hand, all of which were from the stash.
Apparently “ALIVE” is Edie’s new phrase.  I like it.
Here is the skirt in question, finished!

The bottom has a small ruffle out of this really great striped seersucker type fabric.  It was supposed to be the bottom tier in a 4 tier skirt, but I realized I didn’t have enough of it, so we compromised and made it the ruffle. The bottom tier is a pale pink, with white raised dots that don’t necessarily like to show up in photos.

The middle tier is a solid purple linen and the top tier is a fun pink striped paisley pattern.  Paisleys were definitely my most favorite part of the 80’s and I still have a fondness for them.  Edie thought this fabric was ‘wild’ and she loved it with the polka dots and stripes at the bottom. 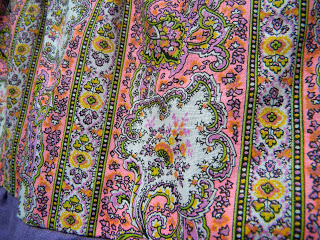 I drafted the pattern myself, something I don’t usually do with success, but I have found with elastic waist skirts, I can do it if I follow a certain formula.  So, I measured her waist and her length between her waist and knees and took it from there.  I made it a little big, so she had room to grow into it, planning to add elastic to the waist as needed.   Pat thought I was making myself a new skirt at first, because it’s not little girl sized anymore.  Then again, our girl is 4’9″, which is getting to be pretty tall.  Her new flip flops are women’s, sized 7/8 and quite frankly, there’s not as much room as I think there should be for her to grow into them.  My baby is no longer a baby, and not so much a little girl anymore.  She is definitely becoming a tween, as evidenced by the list of music she left on my desk this morning that she’d like for me to add to her itunes.  Heavy on the Taylor Swift.  Oh my.

That is as close to modeling the skirt as I’m going to get from her.  For now, it hits her mid-calf and is quite cute.  I’m hoping this will fit her for a few years.  When she was younger, she had a big aversion to anything ‘plain’ which she called boring and demanded I make fancy, by any means necessary. Then she went through a phase where she only wanted me to make her solid colored clothing.  A white linen blouse.  A purple linen dress.  I was quite excited to meet her demands for a skirt that was “ALIVE”. Even more excited to see her pair it with a patterned shirt.  It makes me happy to see her so fearlessly put patterns together with patterns because she pulls it off so well.  For a while there, I thought she’d outgrown that.

I hadn’t finished a sewing project in what felt like forever.  I have a number of projects halfway done, or laid out,  but never find myself finishing them.  It felt good to finish something.  It’s pointed out to me that I finish lots of other things I set out to do, like gardens and cakes and canning, but it really nags at me that I have such a hard time finishing sewing projects.  I’m trying to be better about this and this was my first step towards it.  It feels good.

One thought on “It’s Finished and It’s Alive!”