A while back, I saw this post and I just happened to check out the link to KB’s etsy shop and saw this.  Having just seen the commercial for the Virginia Museum of Fine Arts Picasso show where Edie turned around and said ‘When are we going to see that’, I knew I had to get her a Picasso dress.  So, I got in touch with KB and she was kind enough to make one for my girl.

Of course, I had neglected to actually run this by Edie.  She’s quite the style princess and I have learned the hard way, to not buy her clothes without her approval first.  There are small exceptions to that rule, but mostly it involves the colors purple, black and/or hello kitty.  Anything else, she will just refuse to wear.  I was pretty sure she’d be okay with this, but I wasn’t entirely sure.  Thankfully, she got really excited and started telling anyone who would listen that I was getting her a custom made PICASSO dress.

Finally, the dress was done and we got to see pictures.  Edie’s excitement only grew.  She started telling people how she was going to wear it to the exhibit at the museum.

Yesterday morning, Edie had her first soccer game of the season.  It was a great game,  they won 7-3 and Edie was named “Player of the Game” by her coach.  Seems winter soccer and what feels like non-stop playing since last season has really improved her skills.  They all looked improved out there to be honest.
After the game (we seemed to have lucked out to an entire schedule of 9 am games this season), she wanted to go to the city-wide school art show going on at the high school, where she had a piece on display. There was an open house going on, with all the art teachers there at various craft stations to entertain the kids.  Edie’s teacher was making these incredibly fabulous hats out of tissue paper and of course Edie got one.  Coming back from such a triumphant morning, we found a package from Koleko in the mail.  She immediately had to put it on. 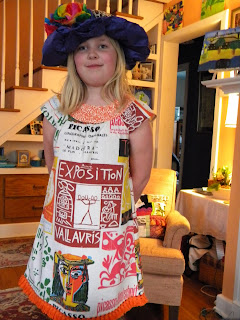 That’s my girl in her new hat and her new dress.  The dress is perfect, don’t you think?

5 thoughts on “That kind of happy.”