For several years now, my Tuesday afternoons have been spent in various school kitchens, teaching area middle schoolers to cook.  I began as a volunteer for one program, moved to another school with that program and am now back at the first school, Walker Upper Elementary, where I am now the lead on the after school cooking program. 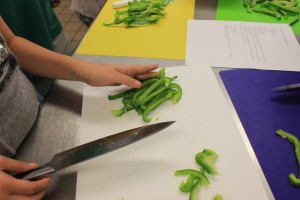 When I took over the program at Walker Upper Elementary, I was the first leader in some time to not come with my own equipment for teaching 20 kids. The after school program was able to carve some money out to purchase some equipment, but it just wasn’t enough.  Donations of equipment from parents and staff came trickling in, including a waffle maker – which is always a favorite thing to make with kids. It got me to thinking and after talking with admin, I decided to do a Go Fund Me to raise money to buy equipment and round out our food budget. I was able to garner the attention of a local food writer, who’s retweet of my post grabbed the attention of the local NBC affiliate, who came out and did a piece on my program and my fund drive. And so thanks to the generous donations and support of family, friends, local restaurants, food writers, TV stations and compete strangers, I raised over $1500 for our little program.

That money helped purchase 15 chef’s knives to round out the 7 we had, 15 paring knives to replace the cheap ones everyone has been cutting their fingers on all year, peelers so everyone gets a peeler, as well as graters, serrated knives, bread knives, honing steels,  stainless steel skillets, pastry blenders (because when every kid wants a turn at something,  I’m pretty sure we can use that to make some banging biscuits), mis-en-place bowls, stick blenders and more waffle irons. 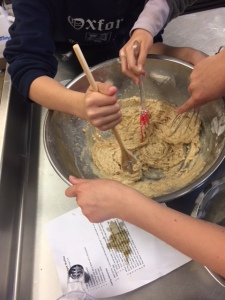 Teaching kids to cook can be great fun, although it has its challenges as well. I tend to refer to the experience as an hour of “chaos with knives”. It is not necessarily for the weak. I often hear it said that Charlottesville city schools reflect our community and it’s true – there is a good bit of diversity in my cooking classes. Trying to steer various skill and attention levels so that we can make a dish, start to finish, in under an hour with anywhere from 15-25 kids is quite the adventure. There’s always a picky eater or two in the group who grouse about how they’re not going to like this dish for a long list of reasons – those are always the first to come back for seconds, every time. There are the kids who love to cook because they do it at home, the kids who will eat anything you put in front of them, the kid who wants to learn to cook because no one at home has time and they want a fast food alternative, and then there are the kids who want to work in restaurants when they grow up because their uncle/brother/dad/aunt/sister/cousin/mom works in a restaurant around town.  There’s the kid who tells me how he is going to go home and cook for his mama and some day his wife and he can’t wait to tell her how I taught him how to cook (that’s also the kid that I hope learns to clean up after himself, or at the very least, how to cook without the entire kitchen wearing the meal because I know his future wife would appreciate that as well). Then there’s the kid who thinks our cooking class should make lunch once a week for the entire school because we always cook such good things. 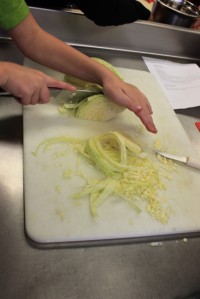 I’m not an expert on nutrition by any means – I’ve long been interested in overhauling our current food system and have been involved in several local aspects of trying to push for that. At some point, I realized that the act of teaching kids to cook and along the way, introducing them to different foods, was probably one of the most revolutionary acts I could do towards changing our food system. I’d love to incorporate more local foods  into what we do, I’d love to see the City Schoolyard Garden program expand to Walker so that we can work together, but in the meantime, I gladly bring fresh herbs from my own garden and share my homemade vegetable bullion, which spurs fantastic conversations with the kids. I’ve introduced them to parsnips and rutabaga and last week on a whim, when I decided to sub tofu in a batch of chicken curry, was delighted to see the number of kids asking to try to the tofu. Not all of them liked it, but the sheer number of kids wanting to try it made me slightly giddy.

Cooking is a life skill. Somewhere I have a quote from my friend chef Mark about how food is the universal language that I used in an article years back. We as humans use food to celebrate all occasions – births, deaths, and everything inbetween. I love teaching these kids to cook – I love talking with them about food, about cooking, about recipes, about what they think we should make next, about how they think we can make a recipe better. Not everything we make turns out perfectly – there is all sorts of cooking fail that we learn from (the chocolate chip cookies that turned out more scone-like than cookie-like, the cupcakes where someone confused confectioner’s sugar with flour) and there are some things we can’t attempt because of time constraints. But for an hour every week, I get to engage kids in thinking about what they put into their bodies and where their food comes from.  It’s a pretty good gig. I am so very grateful to everyone who has helped this program along the way – from community members to parents to school staff. Thank you, to all of you.

8 thoughts on “Tuesdays in the kitchen.”