This past weekend found us at a friend’s mountain cabin – the one we had been scheduled to visit back in January, but had to back out due to the creeping crud cold we all had at the time.  We realized late last week that none of us had anything we had to do that weekend, so we quickly made plans to head out of dodge so to speak.

It was absolutely glorious to spend the weekend with no internet or cell phone reception.  I finished a book, spent some quality time knitting by the wood stove, had rambling walks in the woods with the dog and naps were had. The cabin had a wall of windows that Betsy was quite content to sit and stare out of when we weren’t outside.

On one of our ramblings, we came across what appeared to be an old family burial site in the woods – while there were some old, weather worn and rusted metal grave markers, as well as a few carved rocks and stones placed upright that gave the impression there were several graves on the hill. One of the rusted metal markers was bent backwards, the plastic vase just in front of it, broken with the faded silk flowers that probably had been contained within scattered. I did what I could to straighten the marker and flowers, because well, that’s what I do when I stumble across those sorts of things. It seems like the right thing to do. 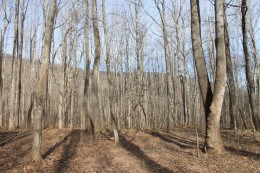 While most of Saturday was overcast, the sun did make an appearance later in the afternoon and we did get a pretty spectacular sunset. Sunday was sunnier and warmer, but alas, we had to get back to real life. It was nice while it lasted though. 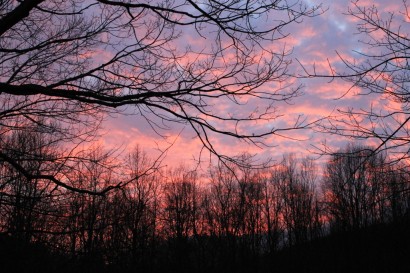