It’s January, which means it’s soup weather, as well as cold and flu weather. In order to ward off illnesses threatening to invade our happy home, I made a pot of miso soup the other evening. The larder was rather bare and because the roads were icy, I made due with what I had. The only greens I had were Brussels sprouts, which on first thought, aren’t exactly a good fit for a miso soup. But then I recalled a bowl of soup I had last winter and inspiration struck.

I had taken Edie to Miso Sweet, the ramen place on the downtown mall one night last March? Sometime around there I think.  I had Brussels sprouts added to my bowl and almost a year later, I’m still thinking about those crispy veggies floating on top. Right there and then, I decided to do my miso soup ‘ramen style’. This does not mean I used actual ramen noodles because I did not have any on hand. When I say ‘ramen style’, I mean with toppings, like a nice soft boiled egg and some roasted Brussels Sprouts, which is basically all I had on hand to add. While I do like to serve my miso soup with noodles, I don’t actually keep ramen noodles on hand – but I do keep rice ones on hand (Trust me, this confuses the wonderful people that run the Asian food store I frequent too. They are always asking what I’m doing with the noodles I’m buying and when they learn I’m not making pad thai or pho immediately, they are confused as to why I would buy these things).

So I quartered said Brussels sprouts, tossed them with sesame oil and tamari and stuck them in the oven. Holy Cow they were good. But in that bowl of miso sopu? They went to a whole other level, taking the soup with it. Beyond eleven.  It was so good that the next day I went out and bought MORE Brussels sprouts so that I could make ANOTHER pot of soup, only bigger.  I may never again make a pot of miso soup without having roasted Brussels sprouts on top. I mean, really. 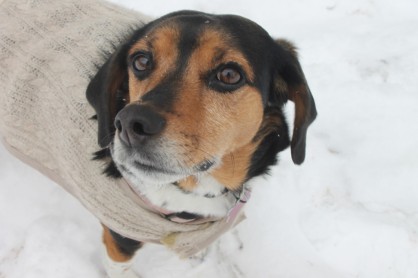 Of course, it being January combined with my general lack of taking the time to snap a good shot of said soup means I’m going to distract you with cute shots of Betsy playing in the snow along with some esoteric wintery shots to compensate for my crappy soup shot.  Hey, they’re pretty pictures, they’re just not pretty food pictures.

At any rate, I followed this method for the soup, minus the shrimp and greens.  Soft boiled eggs are actually quite easy to make, so don’t be afraid to try them at home. I followed this method and it couldn’t be easier. And last but not least, the Brussels sprouts. Quarter them, toss them with sesame oil and tamari (soy sauce will work, but tamari has a greater depth of flavor) and roast in a 400° oven for about 20 minutes or until they are crispy and you find yourself unable to stop eating them out of the pan.  To serve, place your noodles in a bowl, pour soup over, add your toppings and serve. It may seem a little fussy, but it’s worth it.

4 thoughts on “A recommendation.”