I spent three very delightful evenings this past week assisting down at the Charlottesville Cooking School with my friend Martha, who taught an Every Day Cooking Skills Series.  It’s a three part class that is usually taught over the course of three weeks, but Martha decided to teach it over three consecutive evenings in one week as a trial summer run.  The concept is sort of like a boot camp for cooking – it covers a variety of basic cooking techniques so that participants walk out  with skills to throw together simple seasonal and delicious dinners regularly.  Sounds too good to be true,  I know, but Martha is an amazing instructor who can make this happen and I don’t just say that because she’s a friend.  Martha is a trained chef, who has been teaching cooking classes longer than she wants to admit (which is also longer than I’ve been cooking). 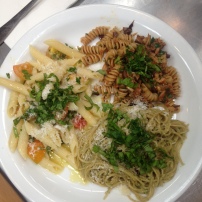 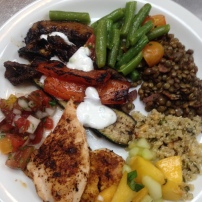 I’ve known Martha since our kids were toddlers – her youngest is the same age as my girl – and I first learned about the Cooking School their first day of kindergarten. We were at school for the official First Day Drop-off reception for parents, discussing what we were going to do now that our children were fully engaged most of the day at school and she told me she was going to start a cooking school. It feels like I’ve been involved, at least on the periphery, ever since.  At one point I mentioned to her that she should consider offering classes on canning, which not only eventually launched my career as a cooking instructor, it has led to me meeting some wonderful people I’m now delighted to call friends which also indirectly led to my little free lance writing career thanks to some of those friends.  I have the utmost respect for Martha as a person, as a friend, as a cooking instructor, as a chef and as a person who makes things happen in our little community.

So, this week’s classes.  They were amazing.  The handouts, which are like Cliff Notes for Everything You Need To Know About Cooking, were so good I made sure to print a copy for myself (Sidenote: As the assistant, my main duties are clean up and just making sure the class goes smoothly. Far more relaxing than the kid’s classes I’ve gotten used to working.) Dinner that first evening was pasta three ways that included trying out a new pasta from Barilla that can be made in one pan without boiling water.  It was most excellent and I highly recommend you stock it in your pantry immediately.

Session one also covered toasting nuts, stocking your kitchen and knife skills. Session two included more knife skills, lessons on sautéing fish, blanching and refreshing vegetables, making vinaigrettes, using, storing and chopping various fresh herbs and an overview on grains. Session three covered grilling, spice rubs and salsas as well as dried beans. There were desserts nights two and three, with lessons on how to easily showcase fresh berries. There were lessons in how to property wash and store greens as well as how to properly wash zucchini and other summer vegetables. I learned new ways of making bacon, of cutting a tomato, how to keep onions from making one’s eyes weepy (wipe the cutting board down with apple cider vinegar prior to chopping) as well as how to make a minced garlic paste with just a chef’s knife. I walked out of there with so much knowledge that I’ve already started applying to dinner and I can’t wait to start applying to classes I teach.

I think perhaps the best part of the series was how Martha improvised on the spot so much, and in that improvising, taught and inspired her students how to do the same. And that really, is the secret to everyday cooking.  Sure it’s good to have a game plan, but when those carrots are a bit too woody tasting to roast like you intended, did you know that you can salvage them by grating them, tossing with salt, fresh herbs, olive oil and lemon juice for a wonderfully quick salad? Or how to use up some of those leftovers in the fridge – on night three, we combined some leftover blanched green beans from night two with leftover fresh marinated tomato sauce from night one with fresh herbs. It was divine, but also a fantastic way to put a fresh spin on leftovers, which is admittedly what meals at our house consist of on a very regular basis.

Martha teaches this class seasonally, tailoring it to available local produce, so one could take the class multiple times and walk out with entirely new knowledge every time.  I think I may need to find a way to attend the fall version, because with butternut squash season approaching faster than we realize, I already know my family would welcome some new additions to the standard fall dinner line up.

7 thoughts on “Getting Schooled.”