The subject of eggnog came up the other day when my friend Leni had dropped by – I’m a fan, but my better half is not. She suggested I seek out a recipe that doesn’t call for much sugar, because the premade stuff is loaded with sugar and in her opinion, not very good. So while I said I’d get right on that, I thought hmm, maybe another year, as I knew better than to tack anything else on my to do list for the week. So low and behold, when I woke up to find an email the very next morning from my dear college friend Will with an eggnog recipe attached, I felt like I had just witnessed a Festivus miracle.

Will had forwarded the recipe from his mother, with a note saying, “It carried some notoriety around Auburn and we were finally able to locate a copy from one of Mrs. Cullars’ neighbors.  Mr. Cullars built my mother’s place on College Street along with a number of other early buildings at AU.”  There was also a note from his mother included which stated,  “If you have the “Cotton Country” cookbook,  I used the recipe on page 17 to clarify the procedure for making Ms. Cullars recipe since her own instructions were somewhat unclear.   Its proportions are nearly identical to Ms. Cullars’. ” Not only had he sent me a recipe, it was a tried and true one, with history! Exactly my favorite kind of recipe!

And so this afternoon, as I began the holiday baking, right about the time my kitchen looked like this, I decided it was time to make the eggnog. 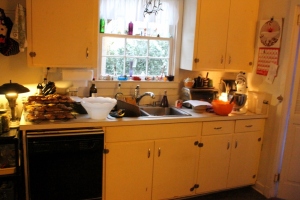 This is not a nog you chug back – this is a nog you dig into with a spoon and one serving will do you. It is rich, with just the right proportions of creamy and boozy,  the texture being smack dab between whipped cream and a custard.  Using Bulleit bourbon, I added the suggested vanilla and served it in mugs with freshly grated nutmeg. 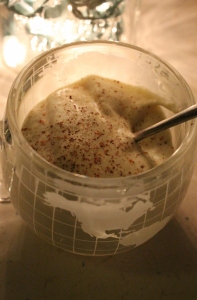 And why yes, that is a vintage Nescafé globe mug.

Thank you for the recipe Will and a very merry holiday to all!

[Note:  This recipe serves about a dozen people and could be served beautifully from a punch bowl. We halved the recipe, using five eggs and ¾ pint whipping cream.   A halved recipe serves six people]
1 Tablespoon 100 proof whiskey for each egg  (we used Wild Turkey)
1 Tablespoon sugar for each egg white
10 eggs separated
1  and ½  pints whipping cream

Separate the eggs.  Beat whites  and ½ the sugar until stiff but not dry and then add the other ½ sugar and beat again.  Then beat the egg yolks until stiff.  Add whiskey a spoonful at a time.  Then add 1 extra tablespoon sugar and 4 or 5 extra  tablespoons whiskey.  Whip the cream until thick and foamy.  Fold the whipped cream and the beaten egg whites into the yolk mixture.    The mixture will be thick enough to eat with spoons and is quite rich.
When we halved the recipe, we only needed 1 and ½ cups of cream and 5 extra large eggs.
David added a bit of vanilla to his serving and suggested a dusting of nutmeg or allspice might also be good in it.