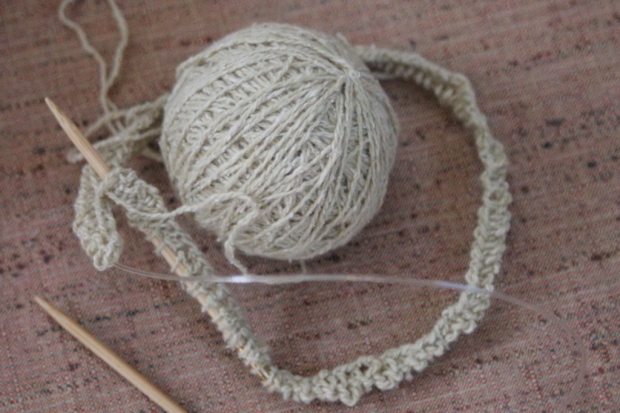 Way back last winter, I started a new project for myself – an Elizabeth Zimmerman Lloie’s Jerkin, which appeared to be a ridiculously easy pattern to wrap my head around – exactly one sketch and three short paragraphs in her Knitting Workshop.  Done entirely in garter stitch – which is nothing but knit stitches back and forth – in one piece from the rear bottom.  Totally my kind of project.

I used a silk wool blend from a box of yarn our friend Eddie rescued from the curb after the great spring student exodus. I wasn’t sure if four skeins would be enough, but knowing the original price tag on the yarn was about $14 a pop and that the yarn was absolutely yummy, I thought what I had would at least gave me a good start on something. I ended up having to supplement with a variegated green merino in a similar weight and gauge I found at The Needle Lady . The color went well with what I had, the yarn had a nice feel and while it was a little pricey, I splurged on it with the excuse that I had gotten the rest of the yarn for free.  I chose to work the merino yarn in as randomly sized stripes. After the break for the neck, I kept the vest on the same needle (I used a circular one), with two separate balls for each panel, going back and forth on each side, to ensure the sides stayed equal without me having to count rows.  It meant untangling balls of yarn from time to time, but given my method removed a good bit of room for error (you know, keeping track of what row I was on), I gladly chose to untangle balls as necessary. For the trim, an applied I-cord (which is ridiculously easy as well), I used yarn leftover from Pat’s sweater (and Mollie’s birthday scarf!). That yarn is actually a little heavier than the ones I used on the body, but I think I like how it looks.  The buttons I found at Les Fabriques and really pull the whole thing together. 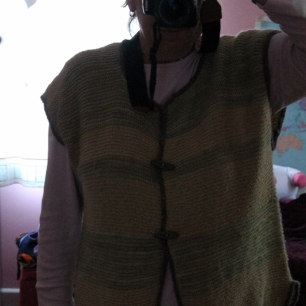 I finished knitting it a few weeks ago, but just managed to get around to purchasing and sewing on the buttons this week. It’s quite comfy and I find it goes with everything – it’s a bit out of my usual color palate of black, but it goes nicely with that uniform, plus helps pull together some of the other stray pieces of my wardrobe that are in the earth tone family. Trying to get a decent shot of myself wearing it was challenging – with the shorter days, our house is mostly just shadows and no one was available to shoot me wearing it this week. I suppose I could have pulled out the tripod and played with the timer, but maybe another time.  I’ve worn my new vest quite a bit this week as I’ve run around town and received lots of compliments on it, so between the cozy factor and the compliment factor, I’m definitely calling it a success.  I may go back and add an afterthought pocket, but for the time being, I’ve already moved on to my next project.  With the holiday season fast approaching, I’m not mentioning what it is – you’ll just have to wait and see.