When I was in college, the designer Vincente Wolf had come to visit our fair campus in the name of some event that was held every year which completely escapes me now.  He gave a few talks, one of which has stuck with me all these years.

As he spoke this particular day, he was sharing photos of a completed project that was due to be published the following fall in one of the magazines – House Beautiful maybe?  (It’s been over 20 years and finding that info is way more of a rabbit hole than I wish to go down today.) The walls of this room were covered from floor to ceiling in framed prints – I want to say botanical, but they could have been architectural.  I remember the look, but not the specifics.  Again, 20 years.  He spoke of how the paint job in that room was a work of art, quite expensive too – and so he was nervous about starting to just hammer nails into it to hang these prints.  Finally, he said that he poured himself a glass of scotch and just went at it.

That story has stuck with me over the years.  Friday night, I found myself talking to someone about sewing & quilting, specifically MawMaw’s quilt, which has sat untouched for over a year now.  I’ve pulled it out & looked at it, I’ve stockpiled fabrics for it, but I haven’t touched it.  I realized I needed the equivalent of a good stiff drink in my hand to give me the courage to just do it.

I did just that this afternoon – not the drink part.  Although my cousin Henry would tell you he was pretty sure I was born with a drink in my hand, sewing is the one of the few activities I will participate in without a bit of liquid courage.  I know, right? 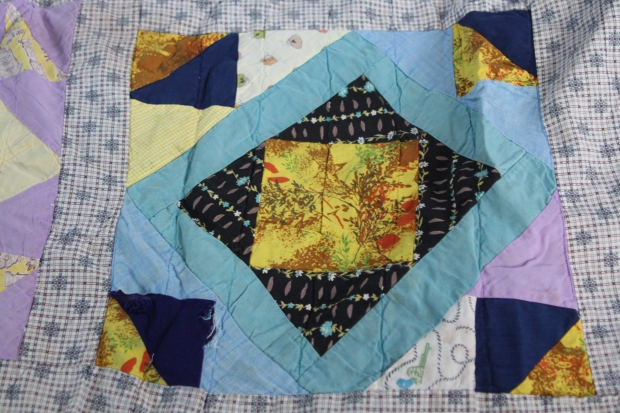 I sat down with the quilt and removed exactly three pieces.  I think ripping the disintegrating back off was actually the easy part.  I’ve debated exactly how to go about doing this part now for over a year – do I do it block by block or do I remove all the pieces that need to be replaced first, then put it all back together.  For now, removing all the pieces that need to be replaced seems to be the way to go.  The first one I removed was far too shredded to be used as a pattern piece in cutting out a new one.

The important thing is that I’ve started.  I realized I needed something to do, preferably something to do with my hands, that just kept me busy, something that didn’t require too much thought beyond paying attention to what I was doing.  This fits the bill.

8 thoughts on “Sort of like pouring a stiff one.”