I ripped out the remnants of the summer vegetable garden yesterday.  The heavy frost last weekend took out what was left, which wasn’t much.  The mini-cukes & the malabar spinach were the only plants producing anything, the tomatillos having bitten the dust somewhere around the middle of September and the tomatoes had looked pathetic for probably almost as long.

While I was out there, a neighbor and her toddler leaving the park wandered over for a chat.  Standing there, Jeff the mailman walked by on his route and stopped to point out the hawk in the tree in the back yard.

He reported it was not the first time he’d seen a large hawk in the neighborhood – in fact, he’d recently seen one flying down the middle of Rose Hill with a squirrel in it’s talons.

We chatted for a bit, then he moved on and then Jennifer moved on and I realized the hawk was still sitting there. 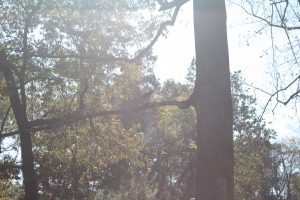 So I ran in and grabbed my camera and came out to shoot these photos.

Which are far more glorious than my poor, tired old garden.

(click on the photos for bigger, more glorious versions.  The bird lover in you won’t be disappointed.)