Edie is a HUGE Taylor Swift fan.  When she found out Taylor was coming to play in Charlottesville, she was pretty much beside herself with excitement.  Could not stop talking about going to see her show.

And then I found out how much tickets were.

By the time I stopped bitching about how I’d only ever paid THAT much for a concert ticket once before and it was for Springsteen, the sold show out.  It seems there are thousands of parents who don’t mind spending that sort of cash to make their daughters infinitely happy, because the show sold out in something like 30 minutes.

And then I heard Tina Fey was coming to speak at UVa the same night as Taylor in a new series on the positive impact of arts on society at The University.  Knowing Edie is a fan, I asked her if she’d be interested in going to hear her speak with me.  I got a big fat yes.

She was speaking at McIntire Amphitheater on Grounds, FREE on a first come, first serve basis with seating opening at 6.

I figured we’d park at the football stadium as advised and take the shuttle over to the amphitheater. I packed us a picnic dinner so we could head out early, leaving ample time to park, get to the venue and line up for a seat.  Edie let me know this was my second chance and I did not want to screw it up.  I drove down McCormick to go past the venue to scope out the scene on our way to the stadium.  Before we even got to the amphitheater, I found an open parking space right there in front of Alderman Library just down the street  – parking score!  We walked down to discover instead of a line, students were scattered about the lawn and built in seating, passing the time by playing board games & studying.  We found ourselves a spot, down in front, Edie pulled out her book and we sat there, soaking up the sun and the surrounding conversations for the next 45 minutes.  We learned Brown had been there since noon.  Not at all sure who Brown is, but there you go. 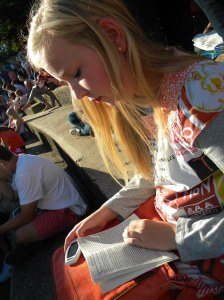 Some very nice gentleman came by and told us that in a few minutes, the ropes across the entrances onto the green where seating was set up were going to come down and if we wanted to move up, we could move to the sections on either side of the reserved center seating.  Edie had some concerns about being able to see, so we decided to move up.   Surprisingly enough, most of the crowd already assembled was quite content with their seats, so while there was a little bit of a mad rush, all in all, it wasn’t bad.  We managed to snag ourselves an aisle seat, twelve rows back, thanks in part to a lovely young couple who were willing to slide over so a little girl could have that end seat, which she considered front row, twelve rows back.  We patiently waited the next two hours for the show to begin, watching the crew set up.  It was a delightful two hours, spending some quality undistracted time with my girl.  She is darn good company.

Edie shot this, after grabbing my camera from me, telling me I didn’t know how to use it. For the record, it was my old point & shoot. Turns out she was right – she’s better with it than I am.

Tina was everything we’ve come to expect from the woman most of us are convinced would be girlfriends with her if we actually knew her in real life.  She was hilariously funny, brilliantly witty, down to earth and inspirational in her talk on the importance of art in society.   It was the sort of fantastic talk to bring your daughter to.  For a great summary of it, click here.   Tina may have been talking about the arts, but so much of what she said rings true for all aspects of life.   It’s okay to make things that not everyone likes, don’t measure your success with money and take pride in your work.  There she was talking about things I’ve built my life around and taking in that message from her somehow helped shaped the perfect day for my daughter, turning what could have been a major fail by not getting Taylor Swift tickets into a major mom win.  The best part of it just might be that Tina’s message was available at a far more accessible price than Taylor Swift.

Winning on every level.