In my quest to make the perfect dill cucumber pickle, I’ve tried my hand at fermenting them this season.  Amanda made it look easy, so I followed her directions, gathering cherry & oak leaves from trees around our yard, as well as a basket full of dill heads from the garden.  I got two pounds of the most beautifully adorable cucs from Whisper Hill Farm and went at it. 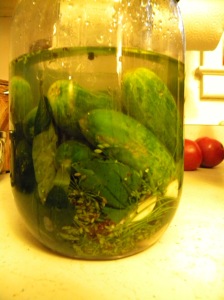 The jar was so pretty sitting there on the counter.  I checked them after three days – they weren’t ready.  Day four, not quite yet,  day five more of the same, but day six I noticed something growing on the top of some of the pickles.  I slightly freaked out, tossed those, shoved the jar into the fridge and frantically emailed Amanda asking if my pickles were still okay.  She said it was probably kahm, not mold, explaining that kahm is a yeast that’s produced during fermentation, totally safe, but it can impart off flavors.

However, upon further inspection, many of the pickles looked sunken. Cutting into them, they were mushy and well, not pickle crisp.  There were some that were salvageable, which I ended up packing in a fresh jar with vinegar, but most of them got fed to the chickens.

Pickle fail.  Sometimes it happens to the best of us.

It had been suggested by two different friends that I try fermenting the next round of those mexican mini-gerkins. If pickling those little gems felt like I was going out on a pickling limb that I was barely qualified to climb out on, fermenting them definitely felt like I was was going off-trail in the wilderness, similar to our honeymoon, when the tour guide Pat & I had all to ourselves in the rain forest on that hike discovered Pat was nature guy and did pretty much the same thing for a living and next thing we knew, we were cutting a swath through the jungle, heading off the beaten path to see some really cool shit most tourists don’t see.  As much as I disregard rules and recipes, I do respect them as a sort of thumbnail sketch in the direction towards your final destination.  I don’t think twice about taking a short cut down a dirt road, much to the chagrin of my family, but something about going off road with food preservation, fermenting style, left me just a little bit nervous.  I wanted a helping hand, a direction to follow.

Angela suggested I follow the recipe in The River Cottage Preserves Handbook for Nasturtium “Capers” as a guide, which was a variation on the recipe in Wild Fermentation  for the same thing.  I made the leap, packing clean mini-cucs in a jar with garlic, covering it in a brine of 3/4 teaspoon salt to 1 cup water.  I started tasting them on day two but it took about five days for them to finish.

The result?  Quite lovely if I do say so myself.  The crispness was preserved and they have a lovely salty, garlicy flavor.  Needless to say, I’m immensely self satisfied with my giant leap into what I consider off-road fermenting.  I have started a second batch, this time adding some dill seed to really get jiggy with it.  I’ve read recipes where the fermented food is packed in vinegar and the processed in a hot water bath – I may try just a wee batch to see how it goes, because the idea of creating the love child of fermenting & pickling appeals to me in that food geek sort of way of mine.

I’ve also been experimenting with infusing gin with dried lavender.  I pour a teaspoon or two of lavender into a mason jar, pour gin over, filling the jar.  I seal it and let it sit overnight.  Strain and use in your next gin & tonic.  It adds a lovely dimension to the hot weather standard, bringing your core temperature down an additional ten degrees, the way the mint in a mojito or mint juliep does.  I’ve seen lovely pictures of it on various websites where the gin was purple, but mine has always turned a shade of brown – so I think the pretty purple pictures must have been fresh lavender, not dried.  I sometimes get a fall bloom on my lavender plant, so if I get so lucky again this year, I’m going to try it with fresh and see if that’s the trick to getting a purple gin.  It drinks just fine, either way.