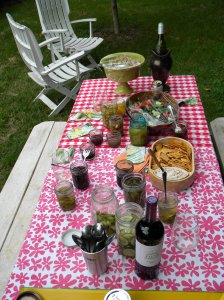 The idea of having everyone over to sample my vast inventory of pickles one evening came out of the girls night I had a few weeks ago with what I refer to as the PTO crowd.  I’m not entirely sure why I refer to this group of women that way – perhaps because we are all the sort of women who step up and run things and at least a little bit of our friendship is based on strategizing who’s running what – school events, girl scouts, soccer car pools and the like.  At least, that’s how I began to get to know them and then we realized that we all like wine.  Also, our kids are friends and it would appear we are all the sort of moms who like to be friends with the parents of our kid’s friends.  As we sat there on the patio at Bang! that evening, we locked in a date on our calendars for an evening where they’d come over, see the finished dining room that I’d been whining about for months, I’d break out all my pickles for sampling – and we’d include our husbands.  Along the way, it was decided that everyone would bring wine & something to eat as well because by now they know the standard Calvert family entertaining mode is that everyone is welcome at any time, as long as you bring your own food & beverages.   We had a party once where we tried to supply all this ourselves and our guests, so used to our mode, went ahead and brought tons of things anyway, so I’ve just thrown my hands up in the air and decided to own it.

So, pickles.  I did not get decent close up shots of any of the pickles – with this particular group of friends, I prefer to live in the moment rather than trying to capture it the entire time.  I happened to grab a shot of the table for the promised blog post and that was that.

We started the evening off sitting around the picnic table as I opened each jar and explained what it was.  We talked about the pickling process as well as the fermenting process, as I had some of my fermented pickle experiments out for tasting as well.  I’m still toying with the idea of selling pickles, although honestly, quite a bit of work goes into those jars, which leaves me hesitant.

I had pulled out 15 jars of various pickles, only to have it pointed out I had forgotten my bread & butter pickles.  When I went to grab a jar of those off the shelf, I realized I’d neglected to get my asparagus pickles.  It was only yesterday, the day after pickle fest that I realized I had only shared one version of pickled asparagus.

I can pickle that.

We had the mexican mini-gerkins pickle, including my newest attempt which I haven’t written about here yet, but I will.  I also pulled out my pickled strawberries.  There was my fermented rhubarb pickles.  I broke out the beets I put up one afternoon back in the beginning of summer with a former teacher of Edie’s who wanted to learn to pickle.   The curried squash pickles were a huge hit,  the watermelon rind pickles launched the discussion on various pickle techniques which brought us to the easy peasy pickles – okra & green beans.  There were pickled cherries & pickled peaches and yes, my bread & butter pickles.  I also pulled out pickles I’ve picked up at swaps.  There was no shortage of pickles.

Nancy brought a pasta salad, Teresa a green salad, Lisa a wild salmon dip with salmon her brother canned, as well as wine galore.   I had made a big pot of gumbo earlier in the week and shared that to round out the pickles, as well as fresh batch of sourdough bread.  We ate, we drank, I got to show off all my food geekiness and we laughed.  Mostly, we laughed.

I now have a jar of every type of pickle I make open in my fridge.  Feel free to come by and sample some.  Everyone’s welcome, as long as they show up with something to drink.