When we made the offer on the house, we swore the first thing we were going to do was the dining room, especially since we had nothing to put in there.  Upon moving in, we suddenly ended up with my grandparent’s dining room furniture, which of course went directly into the dining room and there it has ever been ever since.

Our house had been a rental for the better part of a decade before we bought it.  Previous to that the neighbors tell us, it slowly fell into disrepair as the health of the older lady who lived here slowly declined.  With the exception of the dining room, the entire interior had been painted rental white.  The dining room had this wallpaper that clearly predated the rental situation, with these red walls and white chair rail. 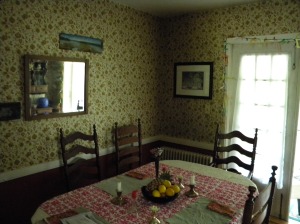 A few weeks after moving in, the hot water heated needed to be replaced.  And after spending the summer months ripping ivy off the roof,  it turns out that all that white bugged me far more than the dining room.

And then we realized we sort of liked the wallpaper.  Also, it was really nice wall paper, that was actual paper.  It was old and had been up on these plaster walls a long time – I knew from ripping wallpaper off my parent’s old plaster walls that old wall paper is a bitch to take down.   It had been put up professionally too – meaning it was going to be that much harder to take down.  Look at that seam job.

We realized we sort of liked it, but we didn’t like the red bottom half.  So maybe we’ll just paint the bottom half.  One of these days. 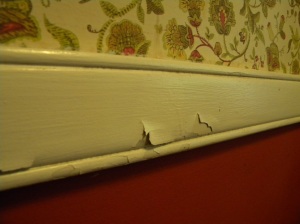 Sort of badly really.  Which means one of these days needs to happen sooner rather than later.  I’ve been babbling about doing this project this spring – and yesterday, I got serious about it. 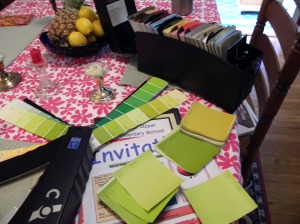 I officially broke out the paint box.  (The last vestiges of my old Interior Design career.  The Sherwin-Williams fan deck and sample box. )  Betty & I have been consulting quite a bit on colors for her building, so I ended up hitching a ride to Sherwin Williams with her yesterday to get samples. 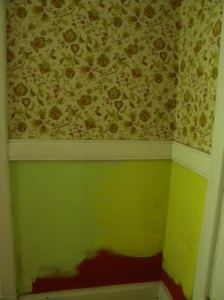 The top photo is the one with the overhead light on – the bottom with the light off.

The room gets absolutely zero natural light.  If it were a country, it would be landlocked.  On a good day, it gets hints of sunlight from the adjoining sunroom.  I have long had it in my head that I’m going to cover the red with a lime green (there are a few good shades of green in the wall paper).  Betty thinks this is perhaps a bit too daring, but she also concedes that if anyone call pull off something like that, it’s me.  On the left is the color she wanted me to try – we matched it to my Kenmore green canister vacuum –  “Dancing Green” and on the right is the one that flipping through the swatches I thought was it – “Nervy Hue”.  I think mine works better, as does my family and after a happy hour follow-up consultation, even Betty agrees, Nervy Hue is the way to go.

There is a ton of prepwork with this – perhaps one of the reasons why I’ve put it off.  The ceiling is also peeling and needs to be scraped, primed and repainted, along with the trim.  There’s quite a bit of taping to be done.  I’m going to have to move the furniture out to do this, as the table takes up most of the room.  Which means, disassembling it, because that’s how it got moved into the room.  I’ll have to figure out where Edie is going to eat breakfast every morning.  But that’s a minor detail.  I’ll also have to unpack the hutch of my various linen collections (any sort of table linen, I have.) and well as all my serving dishes, trays, back-up cutlery, and two of my three sets of china and overflow cookbook storage (all 19 volumes of  the Southern Living Southern Heritage Series live there, as well as Edie’s stash of Julia Child cookbooks, plus a few more),  so that it can be disassembled in order to maneuver it around the room easily to address the ceiling.  Also, I need to address where I had Will Smiley take the door to the dining room down during a dinner party one night. 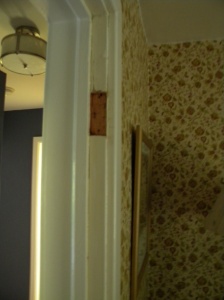 I’d been itching to take the door down  since we bought the house, so one night when we had a gang here & Will wanted to help me in the kitchen & Pat was distracted with other guests, I told Will to go take the door down.  The room is 9’8″ wide by 10’9.5″ long.  There was absolutely no room for a 30″ door that swung into the room with a 5’4″ table.  And that’s without the leaves.  With the leaves, I can extend that table to 12′.  Which clearly does not fit in the room.

It’s not a good party until you start taking the house apart.

It was a good call though to try to match it to the vacuum cleaner, as the particular corner where I did my sample swatches is where it typically lives.  It sort of blends in, yes?