July 10, 2012March 15, 2013
Friday afternoon, we booked it up to Baltimore to attend my cousin Molly’s art show. Show isn’t quite the right word though.  Event is more like it.
My cousin Molly and I are quite a bit alike, with her being younger, better looking with longer legs and possessing of more talent, although otherwise two peas in a pod who happen to be 13 years apart in age.  Molly is an artist, who still works a day job (bartending at a local wine bar, which I guess makes it more of a night job technically).  Since Edie was a wee one, Molly has always made an effort to have a relationship with her.  Consequently, Edie adores Molly and has declared Molly, “her cousin” and not mine.  Every time we visit, Molly makes sure she spends some quality time with Edie and always has a fun little something for her, whether it be fancy new velvet leopard print slippers or art supplies.  Molly’s kind of awesome like that.
Molly and a partner have organized a few events under the artist collective title “HoodSCAPE”.  They combine art, music as well as celebration in the form of costumes, face painting and parades.  They held their second event, UpChuck, Friday night, at The Yellow Sign Theatre on Charles Street in Baltimore.  They even got some local press.
Before the bands got started, we got to take in some of Molly’s recent works. 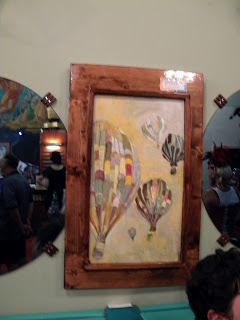 Totally not great shots, but you can get the drift, yes?

I’m loving her balloon paintings.
She’s also done some cool elephant ones that I didn’t get a decent shot of. 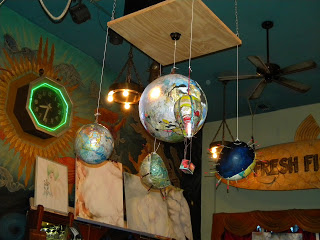 Molly made this for the show.  I think a smaller version would be pretty awesome in a kid’s room, don’t you?

There were also costumes to take in.  There was a bit of a pirate theme going on, with lots of tutu skirts and corsets being worn.

Of course Edie got her face painted.  The main lights were switched off to spotlight the band that was performing in the middle of Edie’s paint job, so I used the flashlight app on Pat’s iphone to help the artist finish Edie’s face. Of course I had to capture the moment.
Yep, that’s my kid getting her face painted in the back of a bar by the light of a cell phone.
Poor Parenting Skills on display.  Or are we opening her little mind up to all the experiences there are in the world?  We had her out of there early, so I am leaning towards the latter. 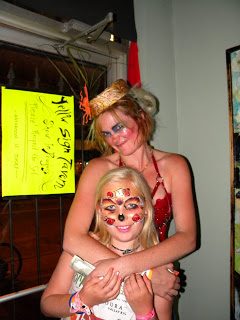 When Edie first got near the door Friday night, she was slightly taken aback.  I had tried to prep her for what she was about to go to and Molly’s brother Mark had lent a hand in this, but clearly, we didn’t quite do it justice.  She was a little overwhelmed when we first arrived, but she was able to realize that “under the strange face painting were just normal people”.   (Her quote.)

We did not stay the entire evening, just the first hour or so, since you know, we are old and someone’s parents who happened to have the kid in tow that evening. The only musical act we caught was Joseph Mulhollen, who we really enjoyed.  In the spirit of the event, he was in costume and we found him reminiscent of Rufus Wainwright.  I now wish we had picked up one of his CD’s, so we’ll have to correct that.
We spent the rest of the weekend visiting with family – Uncle Kevin’s sister Mary Ann and her husband were in town visiting as well.  It really was too hot to do much of anything besides curl up in the AC and watch Wimbledon, although we did make it out for Uncle Kevin’s college buddies annual backyard fireworks display and we attempted to go to Molly’s boyfriend Patrick’s band’s show, which was cancelled at the last minute due to weather or something like that.  Instead, we hung out at Patrick’s parents house, meeting them as well as the band and had a darn tooting good time.
I am quite proud of my cousin Molly.  I’m a little bit in awe actually, at her awesomeness.  She’s a great role model for my Edie, who looks up to her, for good reason.