My Girl Scouts were asked to make signs for the spring fair at their school.  After some back and forth with the sign committee, where I tried to make it clear my girls were game for sign making, but they were going to be what the girls wanted them to be and not what anyone else necessarily envisioned, I was given a list of signs that needed to be made.  Admittedly, I didn’t really pay attention to the requested sizes, knowing my girls love to make big signs. (Okay, so they might not be the only ones who don’t take direction well.)  Also, I didn’t realize they were supposed to be directional signs.  Had I known that, I might have tried to steer them more towards that end.

Well, as much as I could steer them in a direction. I love my girls.  Individually, they are all quite sweet, but collectively, they can be a wild, stubborn pack.  Just a few weeks ago, they very politely, almost quietly really,  threw my entire plan for that day’s meeting out the window by just taking turns making this unholy high pitched but low volume screeching noise until I relented and just let them have their way, which was to run around and play on the playground at school.  They may have also called every dog within 10 miles – it was that sort of screech.  When Edie demonstrated it for her father that night, he called her off within seconds and then completely understood how I was on my third glass of wine since getting home.

They are a great bunch of do-gooders that are someday going to lead the revolution, I have no doubt.  With fabulous signs.  Goodness those girls love to make signs.

I was given a list of 10 signs that needed to be made.  I have 10 girls in my troop, so each girl was given her own sign to make.  Hannah decided that coloring a circle to be a basketball for the Wii Basketball sign was boring, so while she went and got paper to make her sign 3-D, the other girls managed to obtain scissors and glue from a still unnamed source.  They are resourceful that bunch. 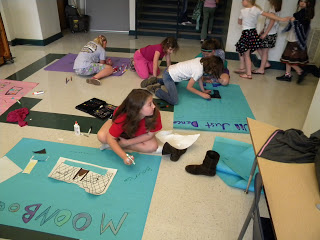 Some of the girls knocked their signs in no time.  Others found themselves crunched at the end, so I had the girls who finished theirs help out the girls who had 10 minutes to get it done.
They may not have been what the sign committee was looking for, but they did turn out great. 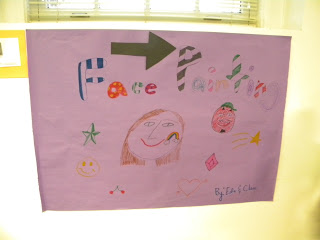 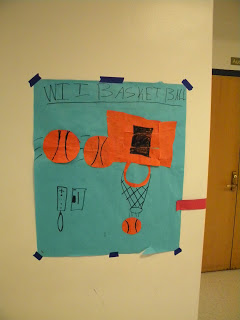 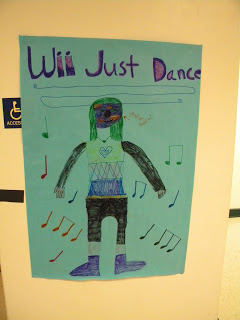 Wii Just Dance!
This sign was our biggest team effort, with most of the girls jumping on this to knock it out in the last 5 minutes.  When they got jiggy with it and made the face tye-dyed, the girl who had spent most of the hour drawing it got a little upset.  I swooped in to save the day though.

By adding a reminder to get your face painted too!
I thought it was a brilliant save.
As did most of the girls.
As you can see, they don’t take direction well.