Remember how I said I seemed to be missing some photos of a scarf I had knit and I suspected a certain smaller person who lives in our house that likes to play with my camera to be responsible for their going MIA?  Well, I owe her an apology.  I took some shots of the magnolia tree in our front yard yesterday, which is now opening up and gloriously pink and when I uploaded them to share here with you what came up instead were the missing shots from our Baltimore weekend.  My camera has been on the fritz lately and I’ve been worried it was the camera – I’ve been saying when this one goes, I’m moving up to a fancy camera and not another point and shoot, and quite frankly, that kind of toy is nowhere near our current budget.  But after a few different incidents, I’m starting to suspect that my memory card has gone bad, which is actually a much cheaper fix.  Phew.

So, since they showed up from nowhere, I thought I’d share.  First up, seen on a front porch on Falls Road, near Hampden hon, in Baltimore as we ran around town one day during our visit there last month. 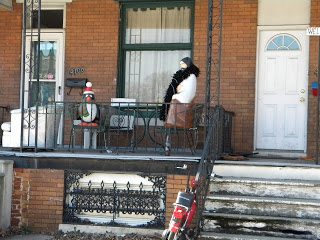 Yes, that’s a Christmas penguin hanging out with a member of the nativity, who is wrapped in a feather boa, with a half full (or empty, depending on how you look at things) large malt liquor beverage under his chair.
I love Baltimore.
Also suddenly back were the pictures of the scarf I had knit my cousin’s girlfriend for her birthday.
Ginger, as we call her, is a lovely gal and has built quite a relationship with Edie.  I’ve told my cousin Mark, her boyfriend,  if it doesn’t work out with Ginger, then he is the one who has to break the news to Edie, because that is not going to go over well and he is going to suffer her wrath.  We hope it doesn’t come to that though.
I have a scarf I knit for myself a few years back in this style – just loose and freestyle, changing yarns as the whim hit me.  I thought Ginger might appreciate one, so I whipped this up for her the week before the party. 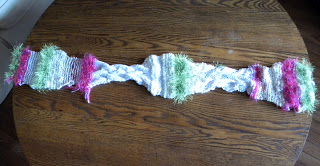 While most of the yarns were white, I did throw some pink and green eyelash yarn in for color. 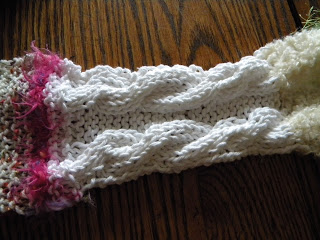 I also did some cables, as I find them fun and I find when I knit cables, the process seems to go faster.
This section is in the eccentric cable pattern.  ( I used A Treasury of Knitting Patterns by Barbara G. Walker.  Which was also one of my best thrifting scores ever.) 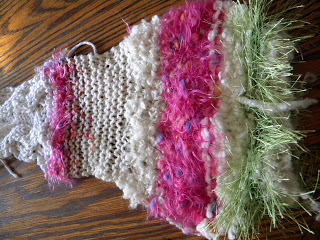 There you can get an idea of the different yarns used – green eyelash yarn, a bulky chenille, a pink eyelash yarn with bumps of color mixed in, a boucle, a fingerweight yarn, a multicolored eyelash yarn I mixed in with the fingerweight and lastly, a worsted weight cotton.  (If you need a reference on yarn weights, look here). I kept to just a knit stitch outside of the cabled sections. 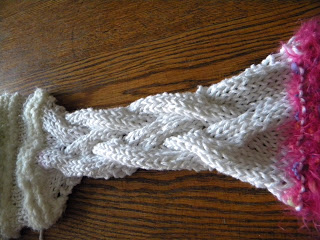 That’s the basketweave cable stitch.
I’m knitting a scarf in a similar vein for the silent auction at the annual luncheon for the Jed Foundation, using primarily blues, from the stash Kristin gave me.  February has been quite conducive to knitting, as the second sleeve on Pat’s sweater is really coming along as well.  I’m almost up to the elbow on it.  I’m even starting to kick around ideas of what my next big knitting project is going to be.
Meanwhile, the shots I meant to show you.  What a difference a few days make! 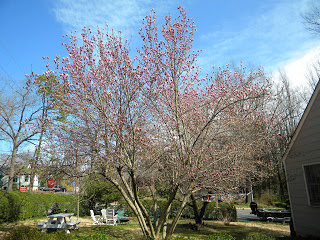 What I call the tulip magnolia, Pat calls a saucer magnolia.  It’s the pink magnolia in the front yard.  It’s the first thing to bloom every spring and it’s starting to bloom.   Now let’s hope it gets to open up without a hard frost, which will turn the beautiful pink blooms brown.  The top is opening up, but the lower blooms have a few more days I think.  (Clicking on the image will give you a better view of the glorious pinkness.) 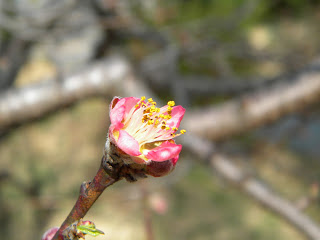 The peach tree is also starting to show some opening buds.
I love looking out my windows at the pink trees in the front yard.
Such a nice sight.
Hello spring.

3 thoughts on “From out of nowhere.”