January 30, 2012March 15, 2013
My husband is cute, smart, witty, loves the great outdoors,and really is one of those people that when other people meet him, they fall madly in love with him on the spot, myself included.  He has some very special friendships with other males that definitely fall into the ‘bromance’ category.  He has one friend in particular, that the friendship is extended to a circle of male friends.  The love between them is strong.  So strong, that our families get together several times a year.  Thankfully, their wives and kids are equally kick-ass, so much so that when we get together we call it ‘cousins weekends’.  I’ve realized recently, that we are a sisterhood in our own right.  I’ve named us “The Sisterhood of the Bromance” and we all agree, it’s fitting.  I might not be friends with them if it weren’t for our husbands, but thanks to our husbands, I have gotten to know these women, whom I adore.  Who else understands that PTO events sometimes require a flask?  They do.
The last weekend in January is one of those weekends each year that is set aside for a ‘cousins weekend’.  Last year, I went ahead and told everyone that I was going to steer it this year, because it was going to be Pat’s 40th birthday, and we were going to have a fest.  We rented Dunlodge, a PATC ‘cabin’, that is tucked away behind UVa.  It is an amazing house.  It was the perfect venue.  I wanted there to be enough room for the brotherhood for the weekend, plus we wanted to be able to invite a few of our local Cville friends for a small celebration one evening.
I had in my mind I had to plan not just the party, but the entire weekend.  I had gotten some emails and phone calls from the sisterhood, asking about details and I told them all, let me get through Edie’s birthday….so day between their actual birthdays, I got an email out.  I’m not sure why I was so worried and felt I had so much to do, because not only did the girls respond quickly with what booze and food they were bringing, I realized that our style of potlucking it and pulling together whatever we have on hand works beautifully.  Our husbands all manage to wing it and we have found ourselves equally adept, maybe even more so.   Mollie has often told us we are the family they choose to have and I feel the same way.  It extends to the kids, too.
Between the sisterhood and the extended bromance, the weekend was absolutely spectacular.  The weather was wonderful, the house amazing, everyone showed up determined to throw something in to Pat’s party.   I decided we needed 3 cakes to properly celebrate, why, I’m not sure.  Friday, at our house, as there was epic  failure of a pound cake, Rieman just so happened to call and assured me, she would fix it with frosting when she arrived.  Thankfully, Mollie & family just happened to pull in and further pulled me off the ledge of baking fail.  Saturday brought cake failure number two, when I realized I put way more rum into the pineapple upside down cake than was called for. It tasted heavily of Capt. Morgan’s, but hey, there are worse things than too much rum in the cake.  I think the hot fudge chocolate pudding cake may have gotten a tad overbaked, but it was still okay and at that point, the chocolate martinis Rieman was pouring made it all much better.  I seriously could not have pulled off this party for Pat without any of them.  The highpoint of every weekend that we get together with them is our Saturday afternoons in the kitchen, were we ladies retreat with drinks and pull dinner together.  This weekend was no different, only this time there was cake involved.  The boys & kids wandered in & out and all of them commented on what a good feeling was coming from the kitchen.  Indeed.
Outside, the men cleaned the patios, built a fire in the firepit and built a fort for the kids.  We declared Nick a member of the sisterhood, because he called last week, offering to bring his soup pot and make brunswick stew for Saturday dinner.  Bringing your own cookware is one of the things the sisterhood does.  The first time I met Nick, he helped me can peaches.  Sisterhood candidate indeed.
Blogger wouldn’t let me load pictures in the order I wanted, but here are the highlights of the weekend, in no particular order.
﻿﻿﻿ 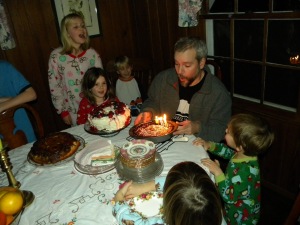 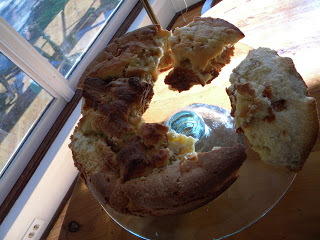 Pound Cake Fail.
After baking it for the correct time and pulling it out, letting it cool, I dumped it out, which is when I discovered the middle was still raw.  In trying to put it back in the pan, it fell apart.  I dumped the raw batter on top, rebaked it.  When I pulled it out and dumped it again, it fell apart, again.  At least it was cooked this time though. 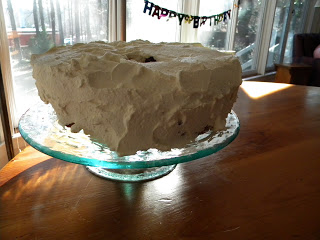 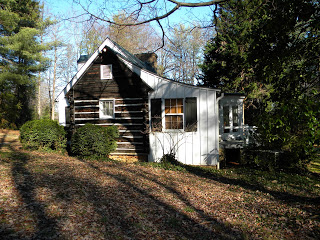 Dunlodge. Cville peeps, check it out next time you need to put up a bunch of out of towners.  It’s fabulous, in a great spot, just behind UVa, near STAB. 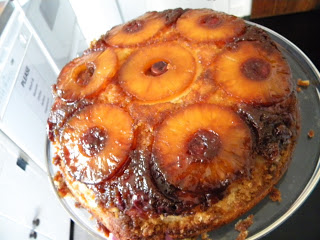 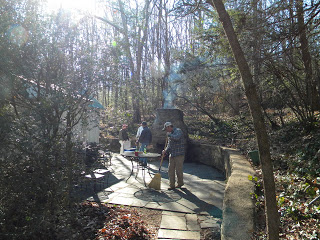 The men, cleaning the patio in front of the guest cottage and building a fire in the outdoor pit. 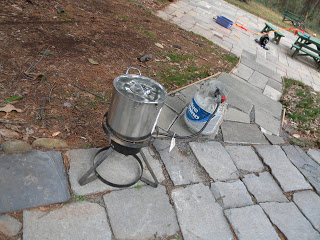 Nick’s contribution, 15 gallons of brunswick stew in the turkey cooker. 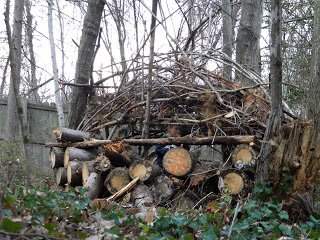 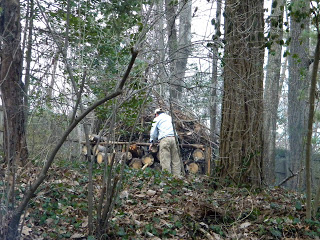 The fort under construction. 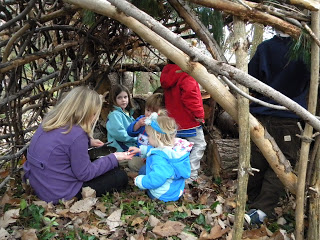 All the kiddies in the fort – with Edie, the oldest, feeding popcorn to Teal, the youngest. 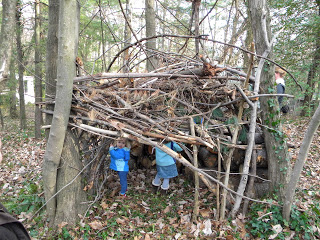 Back view of the fort.  Seriously cool, isn’t it? 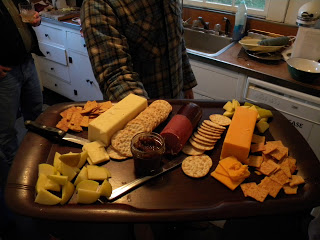 Eric brought cheese, sausage & crackers.
We found a tray, added some apples and I cracked open a jar of bacon jam.
Yum. 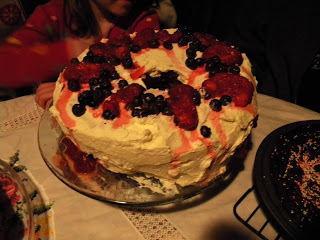 Poundcake after I doused it with blueberries & strawberries I picked last summer and froze.
Ryan made a fabulous sauce to go with it, from the juice left in the bowl after the berries defrosted.  So good, we had it for breakfast the next morning. 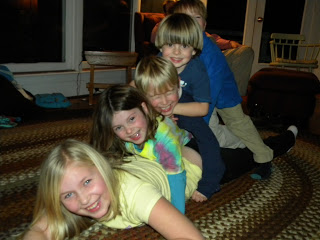 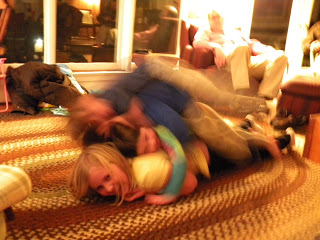 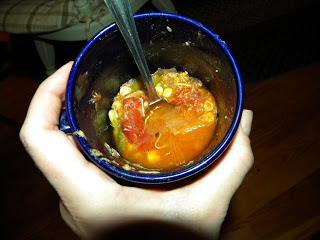 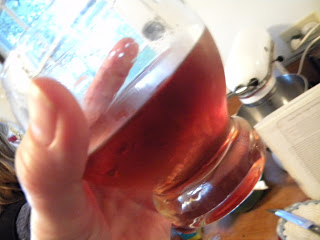 One of Rieman’s martinis.  Not sure if it was the chocolate or the pama one.  They were both good.
And I no longer cared about cake fail after them. 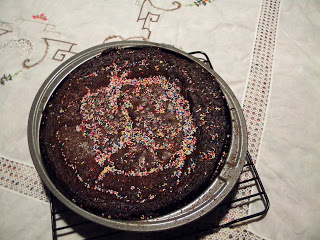 The hot fudge pudding cake covered in sprinkles that resembled a peace sign.  At least, we all thought so.
Thanks everyone that came out, that pitched in and made it so awesome.  It was definitely one of those worlds colliding evenings, where our everyday neighborhood world got to spend quality time with our cousins world.  There were oysters, there was guitar playing, banjo picking,  there was good bourbon being passed around and just lots of good fun.  Everyone said how brilliant it was to have the party at another location in town,  seeing how our house is too small to really have any sort of party at during the winter. I received a number of compliments, but honestly, all I did was line up a house and then threw it up to everyone we invited. I couldn’t have planned a party that good, because you just can’t plan fun.  Fun happens.
And my dear husband is one of those people who just happens to have fun with everything. I am lucky to have him.

4 thoughts on “The Sisterhood of the Bromance and other adventures from our weekend.”