March 1, 2011
One night last week I sadly discovered the oven was not going to turn on. And the end result was the best thing I’ve stumbled upon in a long time.
When Edie came home from school that day, I asked for input on dinner and she wanted pizza.  Homemade pizza.  As she was having a friend over for a playdate and they didn’t want to run up to Mono Lisa Pasta to grab a doughball with me despite my attempts to bribe them with a stop at one of the nearby stores for a treat, I caved to her demands of making my own dough.  (She really is a demanding foodie princess, isn’t she?).  So, I started the dough and as the afternoon progressed, she & said friend wandered down to the friend’s house to play.  I went ahead and made two pizza’s – a plain cheese for her and my favorite, mushroom & onion – so that we could each have what we wanted for dinner, plus leftovers for lunch tomorrow, because we have brought her around to the fact that cold pizza really does rock.  (Even if she’s not on board with it as a breakfast option.) and had them ready to go in the oven.  Also, every recipe for pizza dough that I have makes 2 pizzas and I was too lazy to do the math to cut it in half.
It was 7:00 by the time we had it together to put them in the oven and that’s when I discovered the oven wasn’t turning on.  And unlike Christmas Eve, there was no fixing it this time.
I was able to cram one of the pizzas into the toaster oven to cook and the other one I just shoved in the freezer, right there on the tray.  The next morning, I wrapped the frozen pizza up and put it in the downstairs freezer and was quite proud of myself for such quick thinking.
And then, Edie & I spent the weekend down and out with the flu.  Last night, we were feeling slightly better and up for something more solid than miso soup and man oh man was I happy to realize we had a frozen, homemade pizza in the freezer.  Actually, Pat may have been happier than I was.  So, we grabbed that pizza and popped it in the oven and voila.  Dinner. 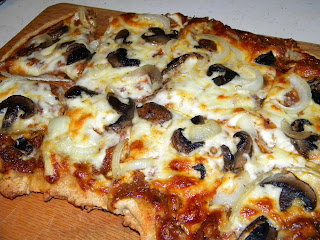 I so totally loved having a homemade pizza to pop in the oven from the freezer.  And it was so easy – I made it, slid the whole thing into the freezer for a few hours, wrapped it up and voila.  And while I was thinking how I need to do this again, Pat asked if couldn’t I do this again please.  I love when great minds think alike.

The best part of the oven breaking is that I realized I could make my own frozen pizza.  How and why have I not thought of this before?!?!?

2 thoughts on “This is what they mean about making lemonade when life hands you lemons.”