In last year’s quest to perfect biscuits, I discovered how baking with lard was key to not just them, but flaky pie crusts.  Lard is rendered pork fat and in order to get the best, unadulterated lard, you need to obtain your own pig fat.  Thanks to friends who raise pigs, I was able to obtain a 3+ pound frozen hunk of fat. END_OF_DOCUMENT_TOKEN_TO_BE_REPLACED

December 10, 2012March 15, 20136 Comments
During some conversation with my friend Leni at some point either this past fall or summer, the topic of mincemeat came up.  Leni having recently retired this past year as the African-American Historian at Monticello,  I knew that our exercise in mincemeat was going to entail historically accurate recipes, at least one of which would probably be from Mary Randolph’s  The Virginia Housewife cookbook.  First published in 1824, it’s considered one of the first American Southern cookbooks and a fairly decent record of how food at Monticello was probably prepared. The conversation had sprung out of discussions of what she was going to do with the all the various parts of the pigs she was then raising.  I was slightly curious to get a pig’s foot or two to try (what else) pickling them while she was more interested in boiling them down and making mincemeat out of them. 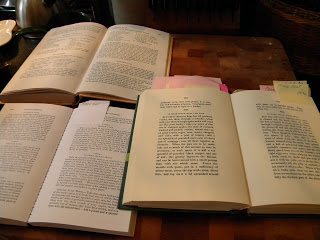 Yesterday was mincemeat making day.  It seems the Mary Randolph version calls for venison, which Jackson supplied, as well as some bear, which was used to make an 1839 Kentucky Housewife by Lettice Bryan version of mincemeat. 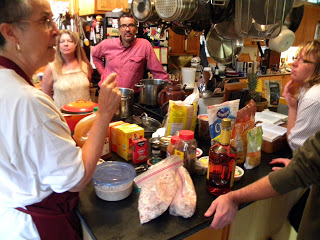 One of the things I like about heading out to gatherings at Leni’s is that you never know who you’re going to meet there.  A few years ago, I’d heard of Jackson’s classes in which students learned to hunt, dress and cook their catch.  I loved the idea of it, would love to actually take it one day, only it seems (to me) that hunting requires patience (that whole sit in the woods thing – I cannot possibly sit still that long) one of those things I’m convinced is an over-rated virtue, mainly because I lack it.  Ideally, I’d rather skip to the butchering and cooking part, getting someone else to do the hunting for me.
The meat Jackson brought technically was roadkill – the car in front of him hit the deer and I missed part of the story on the bear, catching only the tail end of the tale where he actually completed the killing of the bear. So it wasn’t like either animal was sitting by the side of the road for who knows how long.  I share this because I really just like bragging that I’ve eaten roadkill.  (Although as I typed that, I realized it’s not the first time I’ve had roadkill.  Hey, it’s free, grass fed, organic meat.) 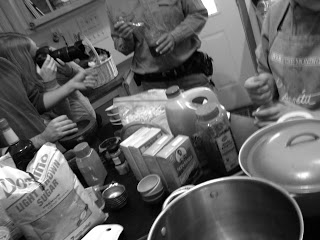 In addition to Jackson, there was his girlfriend Helenah, Jenny, Jessica, two of Leni’s sons, her granddaughters, my Edie and lots of cameras.  We jumped in, with the venison version of mincemeat on one burner, the bear version on another, Leni’s pork version on a third, with a fourth burner being devoted to creating the filling of pelmeni – a Siberian dumpling made with bear. 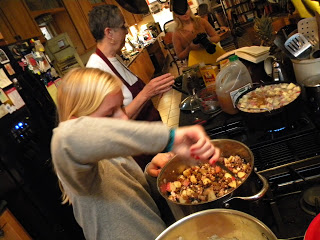 As I was heading out yesterday, Pat asked if I even liked mincemeat, reminding me that it had been served at various family gatherings over the years to much avoidance on my part.  To be honest, I wasn’t quite sure I would like it.  I find that cooking meat well is an art, one that many members of my family lack, so I tend to avoid anything they made with meat it in over the years as a self-preservation technique.  Trust me, if you had grown up eating some of the meat I was served on a regular basis, you’d avoid it too.  I’m always willing to try something though, especially if it’s prepared by someone I know is a good cook.  Considering Leni has not only raised, but prepared some of the best pork I’ve ever had, I knew I was in good hands here. 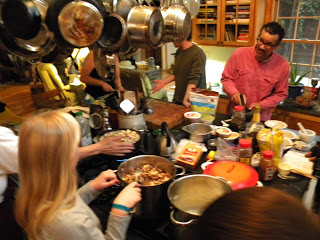 There was much similarity in the recipes Leni had us using.  I was surprised (and delighted) to find that each one called for large amounts of fruit, generally in equal amounts or more to the meat and suet, of fruit in the form of apples, raisins and currants.  Brandy, cider, sugar and spices were also added, then the mixtures bubbled on the stove top for a few hours. 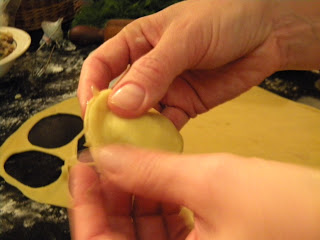 While they cooked, we feasted on some tasty smoked pork that Leni had prepared and then I learned how to make the pelmeni, which essentially is a pirogi.  I’ve always wanted to try making them but have been slightly intimidated.  Thanks to Jenny telling me I could just get going on the next batch and not wanting to appear like I had no idea what I was doing,  I just did what I was told, grabbing a dough ball, rolling it out and jumping into the process.  It certainly helped that the dough was positively dreamy to roll out, which immediately took a huge chunk of intimidation away.  (You know I walked out of there with that recipe too.  Because that is what I do when I stumble upon something like that.) 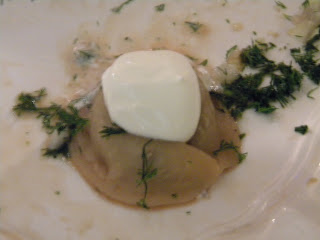 The pelmeni filling was finely chopped onions, cabbage and bear meat, which was cooked before being rolled and then boiled in broth for a few minutes before being served with fresh dill and sour cream. 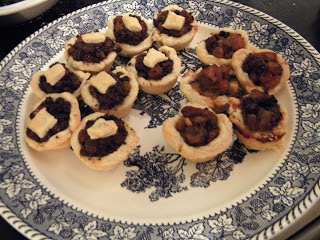 Leni thought that mince tarts would be a better way to serve the mincemeat rather than one large pie.  To differentiate between the venison and the bear mince tarts, the venison tarts had a dot of dough on top. As it was a savory filling, she used lard in the crust, making them incredibly flaky and savory themselves.  A perfect pairing.
Verdict?  I liked the mincemeat.  There was so much fruit in the mix that the meat added texture more than anything else.  There was a nice savoriness about the tarts. The venison version, which was based on the Mary Randolph recipe was a touch more savory than the bear.  I had prepared the bear version, following the Kentucky Housewife recipe, substituting allspice for cloves that were MIA as I was putting it together.  By the time the cloves had appeared, I hesitated on adding them to the allspice, so I skipped it.   As the pork version needed more time, we did not sample it, although Leni assured us all she’d get a jar to us in the near future.  I came home with a pack of pelmini for the freezer, as well as two pint jars of bear mincemeat filling that I look forward to making into tarts over the next few weeks.
Yesterday was a learning experience on several levels – I love cooking with other great cooks because I never fail to learn something new from them. There was history, specifically food history – did you know that historically most wild game was referred to as venison?  I did not.  There was the typical small town connections made that make me love Charlottesville, where it seems everyone sort of knows everyone else somehow, even if you’ve never actually met before.  I listened in on and had some inspirational and informative conversations.  As I’m still getting over this nasty upper respiratory bug, I was not entirely my enthusiastic self, but it was a fantastic memorable day nonetheless, one that I shall be mulling over for some time.  Thank you Leni for hosting, introducing me to mincemeat as well as everything and everyone else I got to know yesterday. What a treat of a day.