Tuesday afternoons, I lead an after school cooking program at a county middle school for PB&J Fund in conjunction with the local Boys & Girls Club.  It’s my second semester doing this and I really enjoy it.  All I have to do is show up and teach the kids – PB&J fund does all the lesson planning and ingredient shopping and I swing by their kitchen on Market Street Tuesday afternoons on my way home from my day job to pick up whatever is needed for the day’s class.

Of course it’s not always that easy. There inevitably is something forgotten or goes awry, because teaching 12 sixth, seventh and eighth graders in an off-site (for the program) home ec classroom in an hour long class, has plenty of wiggle room for things to go awry. There was the week I forgot to grab the bag of aprons, the week the honey bottle exploded, the week the waffle iron broke, which was also the week one group of kids didn’t read their waffle recipe correctly and so their waffles weren’t cooking correctly because the batter didn’t have enough flour added to it, making for all levels of waffle fail.  And that was just the first three weeks of the semester. Thankfully, I have a wonderful volunteer Sara, who is able to roll with the punches right along side me every week. I seriously couldn’t do it without her.

This past week may have had the most challenges yet.  When I got to the school to set up, I realized that the fruit in my box – a honeydew melon, strawberries, white nectarines, apples, pears and limes – did not match the fruit salad recipe I had.  I quickly came up with a game plan that turned out to be mostly right, involving chopping the fruit (working on everyone’s knife skills) and making a dressing out of the limes and honey in the box. Fruit salad made, we turned to the panini, the main attraction for the day.  I plugged the panini maker in and went about getting the assembly line set up for the kids to go through to assemble their own sandwiches before popping them into the machine.  It wasn’t until I went to put the first panini in the grill that I discovered my machine was missing the very vital part of the plates that hold the sandwiches.  On the fly, I grabbed a frying pan from the cabinet and fired up the stove.  Sara, on her side of the room, immediately did the same thing and we grilled all those sandwiches on the stove top.  It wasn’t until the next day, when I dropped the machine off at the kitchen and told Courteney about all the fail we had in the day’s class that I realized the apples and pears in the fruit bag were for the panini and NOT the fruit salad. THAT was in the recipe I did have and clearly I hadn’t read it thoroughly enough.  D’oh! 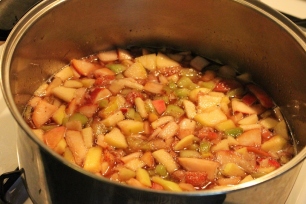 As it turned out, there was a slew of fruit salad left over, which I brought home and added a few cups of sugar to, before letting the whole thing macerate in the fridge for a few days. Thursday afternoon when I came home from my day job, I threw the mix into a pot and made jam out of it.  There was no way we were going to eat it up before it spoiled, so jam seemed like the way to go. I didn’t think it would make a good pickling candidate and I’m not at the point of fermenting where I know what I can do with a few quarts of fruit of fermented mixed fruit, but jam, jam I know how to make.  And so jam I did make.  Because on a day full of fail – recipe, equipment, instructor – here was a resulting batch of jam that didn’t fail.  Never underestimate the comfort of a jar of jam to save the day.